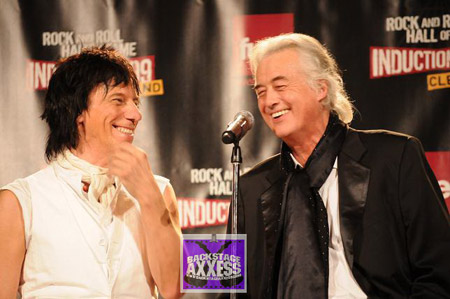 My second assignment for the new site took me to the biggest ceremony in 2009.T he Rock and Roll Hall of Fame opened up their doors for the induction class of 2009 and backstageaxxess.com was there. The acts who were inducted this year were: R&B vocal group Little Anthony and the Imperials, rockabilly pioneer Wanda Jackson, keyboardist Spinner Oldham, blues singer Bobby Womack, rap group Run DMC, drummer DJ Fontana and bassist Bill Black from Elvis Presley’s band, guitar legend Jeff Beck, and hard rock group Metallica. This is the 24th induction and even though Cleveland is the home for the Rock and Roll Hall of Fame, this is the 1st year that it is hosting the event. In fact, it will host the event every third year from now on according to Rock Hall president Terry Stewart. The inductors were as follows: R&B vocalist Smokey Robinson for Little Anthony and the Imperials, country singer Rosanna Cash for Wanda Jackson, Late Night with David Letterman keyboardist Paul Shaffer for Spinner Oldham, Rolling Stones rhythm guitarist Ronnie Wood for Bobby Womack, rapper Eminem for Run DMC, Bruce Springsteen band members Max Weinberg and Gary Tallent for DJ Fontana and Bill Black, guitar legend Jimmy Page for Jeff Beck, and red Hot Chili Peppers bassist Flea for Metallica.

The event started with the guests walking the red carpet into the Cleveland Convention Center. Due to the overwhelming demand to cover this once in a lifetime event, media outlets were only granted access for one staff member. As guests were walking by, some stopped to talk and others wanted to get into the festivities. I was lucky enough to grab Aerosmith guitar legend Joe Perry (and wife Billie) for a really quick Q&A. Go here for that chat. After the inductees performed, they (along with their inductors) were ushered to the media room for photo opportunities and brief interviews. All inductees answered about 4 to 5 questions minus Metallica. For whatever reason, Metallica only took one question. I did get to ask both Ronnie Wood/ Bobby Womack and Jeff Beck/Jimmy Page one question each. The excerpt is as follows:

Gus: Ronnie, what has Bobby meant to you as a musician?

Ronnie: He’s my mentor. We exchange anyways. We talk through our guitars.

Ronnie: Except he plays the guitar upside down and I play the regular way (laughs!)

Gus: Jimmy, How have you maintained a relationship for over 40 years when some marriages don’t even last that long?

(Jeff chimes in): It’s the lack of sex (everyone laughs.)

Jimmy: All right 11 then. Whatever it is. We vibed on the same things. Music is the common denominator of this meeting in the first place. So that’s always been there. We’ve had a lot of respect of each others playing and solo endeavors and all the rest of it.

What a great thrill for me, not only as a journalist, but a music fan in general, getting to ask some of the most renowned guitarists of all time (Jimmy Page, Jeff Beck, Ronnie Wood, and Joe Perry) some questions. Some highlights of the show included Darryl McDaniels speech about growing up as a foster kid and that every kid has something special to offer if given the chance. A very heartwarming and true message from the rap pioneer himself. It was cool to see Jason Newstead play along with current members of Metallica including bassist Robert Trujillo on “Master of Puppets” and “Enter Sandman.” Another speech that I personally gave a rousing “hell yeah” to was guitarist James Hetfield’s speech. James wanted to get the nod out to other bands that he thought were worthy of also being inducted. These bands include: Deep Purple, Thin Lizzy, Rush, Kiss, Ted Nugent, Alice Cooper, Iron Maiden, Judas Priest, and Motorhead. Thanks James! We hope your words will ring true one day for ALL of these deserving bands!!!

We would like to thank Filippa Svensson from Alison Brod Public Relations for allowing us to cover such an exclusive event.