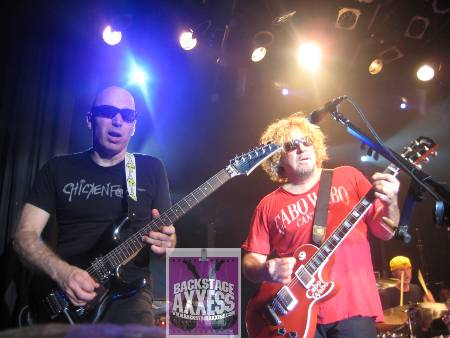 Lots of people Ive been in contact with are asking what is Chickenfoot? Chickenfoot is a supergroup comprised of Sammy Hagar on lead vocals, Joe Satriani on guitar, Michael Anthony on bass and Chad Smith on drums. We, here at backstageaxxess.com, might have to say we were at the show of the year at the Mod Club, in Toronto, Canada, when this talented group recently hit the stage. Although I thought the band would be good, Chickenfoot was not only good, but GREAT! The show started at 9:15pm as the band kicked into the opening track of their debut CD Avienda Revolution. Joes blazing guitar work was evident right from the get go and carried on throughout the night. He showed the audience his skills and passion that has led him to become one of the most recognizable axe slingers in the world. Joe’s amazing skills did not detract from the rest of the band. We were standing a few feet in front of Joe for the entire night and it was astonishing to see 10 foot pedals on the floor behind his mic stand. He didnt overpower the rest of his bandmates as all egos were checked at the door on this night. The band played every song off their debut CD and a bonus track Bitten by the Wolf that will be released on vinyl only. Sammy chimed in on his thoughts about the tune My Kinda Girl. He said; “I appreciate all single moms and what they go through on a daily basis to make sure their kids are taken care of. The audience gave its rightful respect to Sammys message. Hearing Michael Anthonys powerful and harmonic melodies has been a long time coming for this bass players long time fans. A real treat indeed! He and Chad provided a soothing and steady groove to the songs from the heavy rock/blues based CD (here is our review of the CD: (http://rgv.d0d.myftpupload.com//index.php/cdreviews/37-chickenfoot). Michael also let his teeth do the talking during part of Down the Drain. He flipped over his bass and chewed up some notes during the part. In fact Joe did this too earlier in the set. The band was tighter than expected and even though some minor mishaps (like Sammy forgetting what song was next) occurred, the overall vibe the band gave was more than satisfying to the crowd. Sammy also donned the slide guitar for the first song he ever wrote with his first band Montrose; “Bad Motor Scooter.” To remind everyone, most people were their on the band members’ history, rather than Chickenfoots history, because the CD has not yet been released and won’t be for another couple of weeks.

One of the coolest things to see was how the band was actually having fun up on stage. It was real, genuine fun. Its been a while since I’ve seen any band members of this magnitude exude pure happiness and look like they truly wanted to be there. Each member took a moment to thank the fans for coming out. Most of all, each respected and appreciated each other. How long will at last? Who knows? But to this reviewer, they certainly made a believer out of me with wishes that Chickenfoot will be around for a long time to come!!! 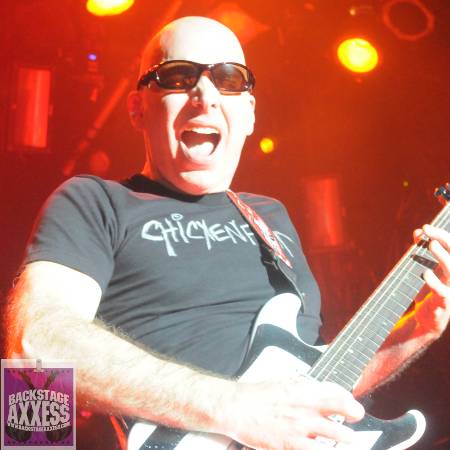 We would like to thank Jessica Erskine from Rogers and Cowan and Kathy O’Donnell from Live Nation Canada for allowing us to cover the show. We are working really hard to grab an interview with one of the guys in the next couple of weeks so stay tuned to see if we can make it happen!