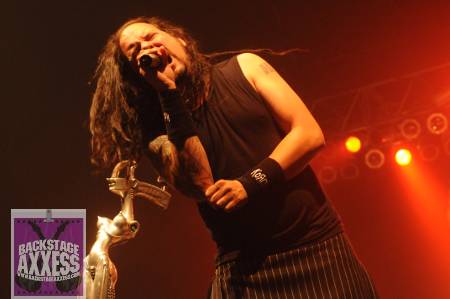 Korn is on a short tour called ‘Escape from the Studio’ that is bringing them to 25 cities in the United States before they go to participate in various Festivals throughout Europe. They played the Rochester Armory to a packed house. The band took the stage at 10pm and kicked into Right Now off of their 6th effort Take a Look in the Mirror. A hard driving song with a heavy dose of Fieldy’s bass pounding beats. The set list consisted of 16 songs, including Falling Away, Twist’ and the hit single “Freak on a Leash. Before the show, we were told that Jonathan was not feeling up to par, but delivered nonetheless. I noticed after the 4th song “Thoughtless,” Jonathan retrieved by the drum kit to get a mask and some 02. This did not damper his performance one bit. He came out and played the bagpipes in the midst of the set to the delight of the fans. He continues to show why he is one of the best frontmen in any band today. He connects with his fans like few others can do. This was no more evident than in the song “Y’all Want a Single” as he directed the entire audience to say “Fuck That!” at a certain part in the song. The show featured the three original members in front (the aforementioned Fieldy and Jonathan with guitarist Munky) with the backing parts of Ray Luzier on drums, Shane Gibson on rythym guitar and Zachary Baird on the Keyboards. Korn does come back to do two shows in the US, after their European stint, before they head into the studio to complete their ninth studio effort. There may be a question mark as to what is going on with former band member Brian “Head’ Welch, and will he or won’t he return to the band, but on this night, the talent of the other three proved to be strong enough without him!

Blind
Here to Stay
Got the Life 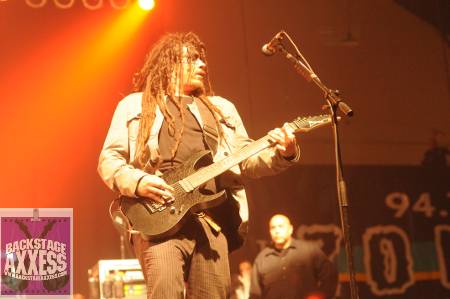 We originally were scheduled to sit down with Jonathan for an interview before the show (due to him not feeling well and to preserve his voice), but guitarist Munky was more than happy to fill in for him. Look out for that interview coming soon!

We would like to thank Mark Philips for setting us up with the credentials. For more information on Korn, you can go to: www.korn.com