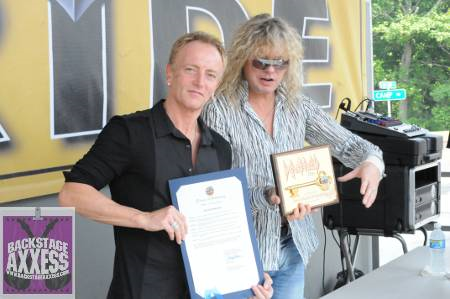 Rich’s Music Exchange in Hamburg, NY welcomed bassist Rick Savage and guitarist Phil Collen from the band Def Leppard to their store on June 26, 2009. Hamburg proclaimed June 26, 2009 Def Leppard day and they were presented the proclamation and the key to the city. Jackson guitars was a major force of making this event happen and one of the best (if not the best) local music stores in the Buffalo, NY area, was up to the task of holding an event of this magnitude. The band showed up fashionably late but stayed for an hour to make sure that the 300 plus crowd were taken care of. The 5 minute downpour didnt damper spirits of this hearty gathering. Lots of different things were signed including albums, promo pictures, boobs, and asses. Its all in the name of Rock and Roll, right guys? Rick and Phil were a delight to the locals and all in attendance seemed happy that what they got was well worth the wait!
All who were looking forward to coverage of this years tour with Poison and Cheap Trick, we are sorry to report that matters beyond our control, we will be unable to cover the show later that night at Darien Lake Amphitheater. We are hoping something may change before one of their upcoming shows.
For more information on the Music Exchange, you can go to: http://richsmusicexchange.com/default.aspx 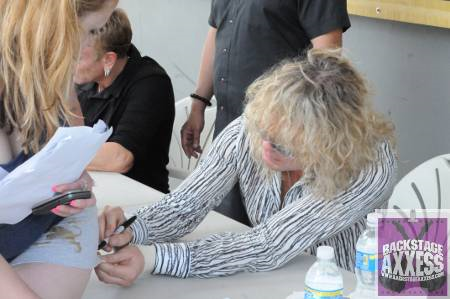