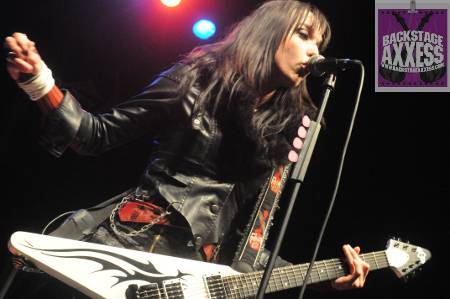 Pennsylvanias Halestorm took the stage at 10:10pm and delivered a 45min set to a scarcely occupied club. I had thought this band was new on the scene but they have been in existence since 1998. The set started off with Lzzy Hale singing the first verse of “Its Not You,” acapella, before her band mates joined her up on stage. Lzzy’s voice was incredible from start to finish. She has a great set of pipes comparable to those of Amy Lee or Ann Wilson. Lzzy also shares the stage with her brother, Arejay Hale, who has to be one of the most animated and energetic rock drummers I’ve seen in a while. Half way through the set the drum solo took an interesting turn when all the members of the band lined up side by side and were drumming along in unison. There was a great range of songs in the set featuring some tender moments to full out rockers. The crowd was thanked and Lzzy stated, “We would be here even if nobody was here.” The band left the stage after 40min and came back for one encore song that was dedicated to the old school “Halestormers” in the house. Literally, right after the show, the band walked over to the merch table to commence a meet and greet with the fans. With their recently released major label debut and increasing radio airplay, this band is starting to get noticed. I would highly recommend checking them out.

Opening bands The Veer Union and Burn Halo warmed the stage, each with 40min sets. 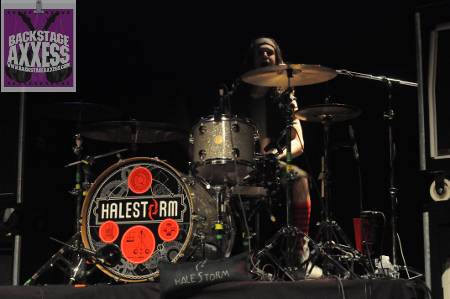