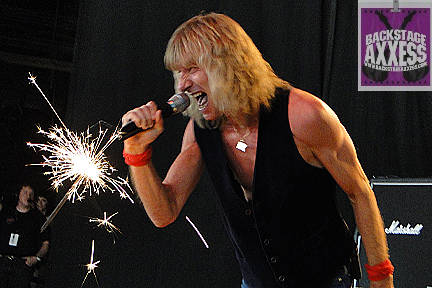 Gilby Clarke started off the day on the main stage at noon playing a 35min set to a fairly empty venue. His set was, unfortunately, pretty boring as he focused on his originals including Cure Me Or Kill Me, “Tijuana Jail” and played the Supernova tune “Be Yourself” and a cover of “Knockin On Heavens Door”. Veteran rockers Y&T are celebrating 35 years of making music and their age sure didnt hold them back from putting on a rockin performance. The second song “Dont Stop Runnin” got people up on their feet. Most of the hits were covered with “Dirty Girl”, “Mean Streak”, “Summertime Girls”, “Rescue Me” and “Forever.” Slaughter was a disappointment as Mark struggled to sing throughout the entire 40 minute performance. His voice was completely shot. The band members Dana Strum, Jeff “Blando” and “Timbo” DiDuro were tight and energetic and definitely made up for it. The fans were still very receptive and Mark even went out into the crowd for one song. Some songs performed were “The Wild Life”, “Spend My Life”, “Mad About You” and then they closed with “Fly To The Angels” and “Up All Night” which had the crowd singing along loudly. Its always a gamble if Jani Lane will be coherent enough to sing properly and with this performance, he was sober and on the ball. He had lots of energy as he was running all over and even up into the stands. His band was made up of Keri Kelli (Alice Cooper) on guitar, drummer James Kottak (Scorpions), bassist Kevin Baldes (Lit) and former Warrant keyboardist Shawn Zavodney. The set contained all the Warrant staples like “Down Boys”, “Heaven”, “I Saw Red”, “Uncle Toms Cabin”, “32 Pennies” and “Cherry Pie.” He did, however, throw in a new song called “Changes.” I had to laugh as he was selling a solo t-shirt featuring Warrants Cherry Pie album cover on it. His slot was originally slated for an hour but was cut down to 45 minutes as they were running behind on the main stage. As for Dokken, I only saw 2 songs which were “Into The Fire” and “Just Got Lucky.” I wish I could have seen more as they were really good, but I had to leave to catch Steel Panther.

Steel Panther is one band I have never seen live and was really looking forward to it. These guys were hilarious and exuded so much cheese it was insane. They overdid all the 80s clichs on stage. They dawned crazy spandex outfits and had big hair. Surprisingly, they were all great musicians. They were promoting their upcoming CD “Death To All But Metal” for which they played the title track along with other ditties “Girl From Oklahoma”, “Fat Girl” and “Party All Day.” These guys were great and the highlight of the festival for me. Check them out if you can as they play weekly in Hollywood and Vegas. You wont be disappointed! Local boys, Kix, were on fire and the crowd was going insane for them. Im surprised they werent one of the headliners. Steve was hilarious with his on stage banter. I only managed to take in 30 minutes of their performance and caught “Sex”, “The Itch”, “Girl Money”, “Dont Close Your Eyes” and “Get It While It’s Hot.” I left Kix early to catch L.A. Guns as it’s been since the early 90’s that I last saw Phil Lewis on vocals and was really looking forward to this. They stated on stage that this is the ONLY true L.A. Guns that exists, as it gets confusing which version you will see. Tracii Guns also tours under that name. This line-up features original members Phil Lewis and Steve Riley along with Stacey Blades and Scott Griffin. I really enjoyed the show, a great sleazy performance and Phil still has the voice. Highlights were “Slap In The Face”, “Sex Action”, “Never Enough”, “Kiss My Love Goodbye” and “Rip And Tear.” The big shocker was that they didn’t perform “The Ballad Of Jayne” as one song had to be cut and they went with a rocker to finish off. After L.A. Guns, I had to rush off to catch the first headliner of the evening Extreme, who were already in progress. Nuno was in fine form and Gary was really working the stage. They love to play extended versions of their songs live, but tonight, I wasn’t bored for once. They could have done without the hoedown, as they called it, with the new song “Take Us Alive” that came across as very country. Highlights were “It’s A Monster”, “Play With Me”, “More Than Words” and “Get The Funk Out.” Nuno mentioned that Ratt was running late and they would play one more song acoustic. He was having issues with the guitar and ended up throwing it across the stage and said, “Never buy a Washburn!!” They performed “Hole Hearted,” electric for the most part, to close off their performance.

Ratt is celebrating the 25th Anniversary of the “Out Of The Cellar” album, but stuck to a standard set list for this outing. The big surprise was that John Corabi was back in the line-up instead of recently added Carlos Cavazo, not sure why though. Highlights in the 60 minute set were “Wanted Man”, “Back For More”, “Way Cool Jr.”, “Lay It Down”, “You’re In Love” and “Round And Round.” Missing in action was “You Think You’re Tough” which should have been played instead of “Nobody Rides For Free.” Ratt is one of the few bands from back in the day that can still pull it off live. I have never seen a bad performance yet and tonight was no exception. Twisted Sister closed the festival on the main stage with promoting the 25th Anniversary of the “Stay Hungry” album with a huge backdrop and the pink fence displays. Due to guitar issues, both Eddie & Jay Jay disappeared during the first song and the band actually became a three piece! Eddie’s trademark bullseye guitar finally returned for the fourth song. The technical issues didn’t slow them down and Dee kept the musical machine going. We were treated to all songs off the “Stay Hungry” album, except for one, including the rarely played “Horror-Teria” and “Don’t Let Me Down.” The band put on a high energy set and Dee was his typical self with his stage banter. An incredible performance and a great way to end the festival!

The was one of the best festivals I have ever attended. The venue was awesome and nominated as best outdoor venue as per Pollstar. The sound was great and the grounds were set up well with good access to the second side stage. There was even a small third stage located in the village that showcased the Matt And Dixie’s Circus Sideshow, but I found no time for that. Vendors were set up in the village as well and Warren DeMartini did an autograph session at the Washburn booth. The food selection was great but a little pricey. The major downside to the festival was the overlapping of set times and you had to make a choice between 2 bands at times. I missed out on seeing XYZ, Jetboy, Bullet Boys, Keel and SLAMM (w/Carmine Appice). If they could work this out for next year, this could be one of the best festivals out there. I was really impressed; stay tuned for next year’s edition. 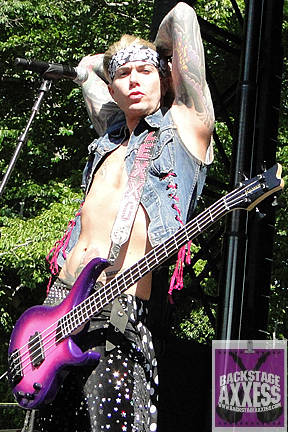 We would like to thank Kisha Shorter of 930.com for allowing us to cover the event!