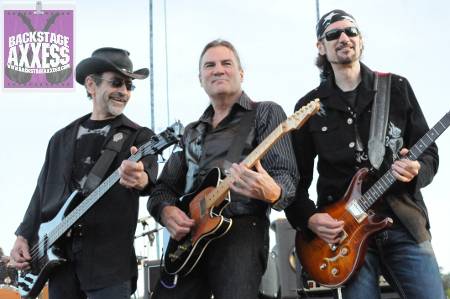 Grand Funk Railroad brought its “American Band” tour to Artpark in Lewiston, NY, on July 14, 2009. It was a free show and the audience seemed to be spilling out of the park. Grand Funk Railroad includes original founding members Don Brewer (vocals and drums) and bassist Mel Schacher. Joining Don and Mel in the lineup are singer Max Carl (38 Special), guitarist Bruce Kulick (KISS), and keyboardist Tim Cashion (Bob Seger, Robert Palmer).
The band took to the stage at about 8pm and put on a solid and musically tight performance beginning with a newer song called “Bottle Rocket.” Celebrating 40 years of funk, GFR played a nearly 90 minute set featuring plenty of classics to please fans, both old and new, with everyone singing along to “The Loco-Motion.” Max Carl’s vocals were “Shinin’ On” for the entire show. He even performed his .38 Special hit “Second Chance.” Don Brewer displayed great showmanship throughout the concert, especially during his drum solo…reminding the crowd that the master of funk was in the house. Shortly thereafter, the bongo beat got going with the band grooving into a percussion ensemble, including guitarist Bruce Kulick on tambourine. A major highlight was seeing former KISS lead guitarist, Bruce Kulick, as he waled into a guitar solo that began with “The Star Spangled Banner,” complete with an American flag at his side. Out of the guitar solo came “Inside Lookin’ Out,” then “Some Kind of Wonderful” had the crowd singing again. The sing-a-long continued with “I’m Your Captain/Closer to Home.” The band exited, but the fans wanted more! When drummer Don Brewer came back on stage wearing a giant Uncle Sam hat and a white sequined jean jacket with the sleeves cut off, everyone knew this was an “American Band.”
If GFR is COMIN TO YOUR TOWN TO HELP YOU PARTY IT DOWN,” check it out! You won’t be disappointed. 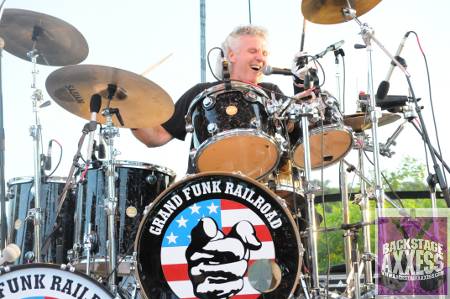