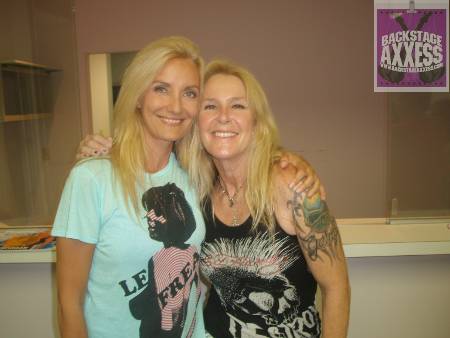 Canadian artist Sass Jordan touched down in Lockport, NY, as part of the 2009 Molson Canal Concert Series. The weather held up for this free outdoor show. The schedule was running behind, so instead of a 7pm set time, Sass graced the stage at 8:15pm. We heard a 60 minute set comprised mostly of songs from the 90s, 5 tracks from 1992s Racine and 4 from 1994s Rats.” Sass was looking great and her voice was powerful, she nailed every song. Her husband, Derek Sharp, made a special trip to fill in on guitar. Sharp is otherwise featured singing with The Guess Who. The crowd was very receptive, especially during the Rats material, when she truly rocked out. Two new songs were played from the upcoming CD From Dusk Til Dawn, the first Why Did You which had a country rock vibe to it and the second What I Need which was described as rockabilly by Sass. It was a great set and would have been longer but due to time constraints 2 songs had to be cut.

Rock and roll never forgets. This sentiment was proven once again as Lita Ford fans of all ages, having anxiously awaited her return to the rock scene, turned out to welcome their metal mistress back to the stage. A little over a year has past since announcing her comeback at Rocklahoma last July, and Ford wasted no time bringing her catalog of riff- roaring rockers to a congregation of devoted fans.
Ford started the set with earlier material that included Larger Than Life, Black Widow, and Cant Catch Me, a song that was co-written by Lemmy Kilmister of Motorhead. After briefly addressing the crowd, Lita spoke about her upcoming October release entitled Wicked Wonderland, which she promises to be her sexiest and heaviest work yet. This was apparent as the next pair of songs, Scream and Crave were performed by Ford and her husband of 15 years, Jim Gillette (former singer of 80s glam band Nitro turned Mixed Martial Arts aficionado) who shared the vocal spotlight. Lita chuckled as she apologized for having to rely on a cheat sheet to remember the lyrics to these brand new tunes. Fans didnt seem to mind as she periodically glanced down at two crumpled pieces of notebook paper that she held in her hand. The songs are definitely heavy and to the surprise, and possible dismay of some fans, Gillette also participated on two other tracks from Wonderland, Patriotic S.O.B. and Betrayal, a song that will appear along with Lita on a new X-Box game, Brutal Legend. Gillettes multiple octave range tended to dominate Litas vocals on the new material a little more than fans expected, however, they seemed receptive and Patriotic S.O.B. was met with thunderous applause.
Litas signature black B.C. Rich Warlock was introduced for kick ass versions of Back to the Cave and Hungry, where Ford demonstrated the power and grace of her sex appeal that effortlessly blends with her guitar prowess and dueled it out with guitarist Ron Bumblefoot Thal, who is currently on loan from the alleged Guns n Roses touring line-up.
Keyboardist, Michael T. Ross, teased the crowd when he soloed the intro to Ozzy Osbournes Mr. Crowley as a fitting prelude to Close My Eyes Forever. Lita sang both parts of the duet, and as the crowd sang along, she wailed on her white B.C. Rich Double Neck Bich guitar, that she proclaimed, took a bite right before the show closer, Kiss Me Deadly.
Before leaving the stage, Ford and Gillette introduced their two sons, Rocco and James, who have now become regular participants in their Moms performances, bringing her guitars, water, and leading the crowd in clap-a-longs.
Ford undeniably laid the groundwork that influenced many female rockers that followed her. Her dedication and confidence in her craft are commendable and any artist who is able to return to the business after a 15-year hiatus, spawning two kids and still manages to look and sound as good as Lita, well shit, I dare you to name two. Long live the Queen!

Larger Than Life
Black Widow
Cant Catch Me
Scream
Crave
Back to the Cave
Hungry
Fallin In and Out of Love
Patriotic S.O.B.
Betrayal
Close My Eyes Forever
Kiss Me Deadly 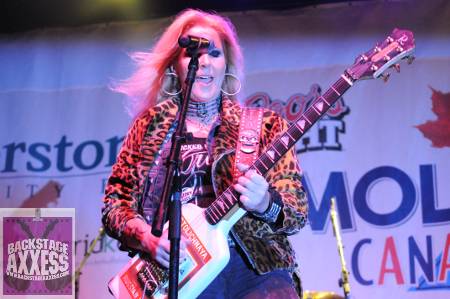 We were lucky enough to spend time with both ladies before their respective shows for a one on one. Stay tuned for the interviews in the upcoming week.