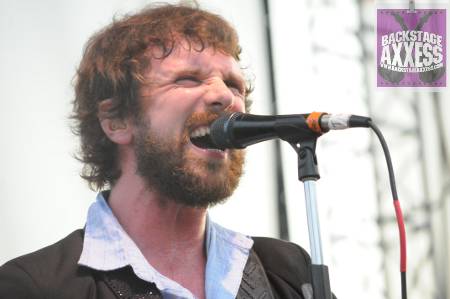 One of the hottest new Canadian bands, The Trews, made a stop this past Wednesday at Artpark in Lewiston, NY. The weather didnt cooperate until just before The Trews took the stage. This didnt deter them from putting on an amazing performance for the modest crowd who were willing to brave the elements to see this talented up and coming band. The second song Im Not Ready to Go was flavored with Humble Pies 30 Days in the Hole during the last chorus. This integrated extremely well enough that if you werent familiar with the Humble Pie classic, you would have sworn that it was part of the song. It was keyboardist Jeff Heisholts birthday the day before and the band got the crowd to wish Jeff a Happy Birthday before Paranoid Freak. The unexpected treat of the evening was singer Coilin MacDonald, strapped with only an acoustic guitar, who gave a strong vocal rendition of Michael Jacksons Billie Jean. It was different, but Colin went right into Yearning with the band soon joining him half way into the song. The true talent of this band was even more evident on the song Sing Your Heart Out. The band went to the front of the stage and all sat side by side on stools. The MacDonald brothers were on acoustic guitars, bassist Jack Syperek on tambourine, drummer Sean Dalton on the bongos, and keyboardist Jeff Heisholt on the cabasa. The band absolutely killed on this track. After this, Sean did a bongo solo followed by a drum solo while a chorus of the Rolling Stones song Shelter Me was also intertwined with Fleeting Trust. John kept getting his mic cord tangled with Jeffs chair and other parts of the stage during this song, which led to him making some jokes throughout the number. The band showed boundless passion throughout the performance and it really came to light when guitarist John Angus MacDonald jumped into the photo pit, guitar and all, and decided to do a Pete Townsend/Chuck Berry impersonation for the fans in the front row. There wasnt much of an encore per say, but as the band said their goodbyes and thanks for having us they kicked into Man of Two Minds, before ending with I Feel the Rain and Be Love.
We sat down with the MacDonald brothers before their show (ed. note: stay tuned for this) and you could tell how tired they were from driving all night from a previous gig. No matter, this did not affect their performance and they showed what true professionals they are by delivering the goods to the fans at Artpark. Hopefully the U.S. audiences will hear that and feel that through their live performances. These guys are a MUST see! 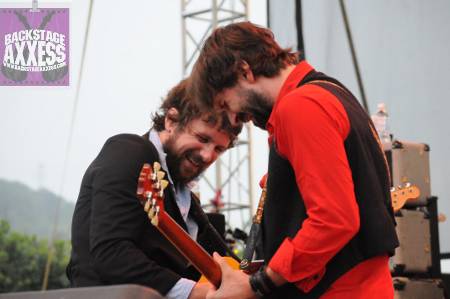 We would like to thank Jen Farhood from Chipster Entertainment and Aimee Ross from Bumstead Productions for allowing us to cover the show.