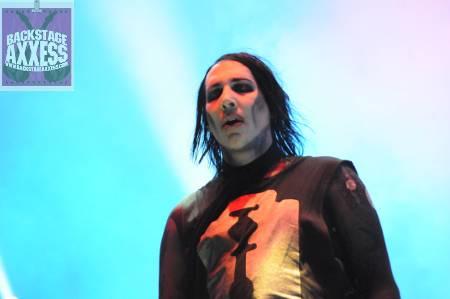 This was the second annual Mayhem Festival and my first time attending it. I was supposed to see it in Toronto, Canada, but that show never happened. This festival featured 13 metal bands that played across 3 stages starting at 1:55pm. There was no overlap on the side stages which was cool.
Trivium closed the Jager stage at 5:15pm and then Cannibal Corpse finished off on the Hot Topic stage at 5:45pm. Each band had their own merchandise tent set up and Cannibal Corpse had the most shirts Ive ever seen one band sell!! There were also vendor tents and the bands were conducting meet and greets. Mushroomhead started things off on the main stage at 6:20pm. They were only on the bill to replace Bullet For My Valentine for three shows while they were in Europe. I was really bummed that Bullet wasnt playing this night. I only saw the first two songs of Mushroomhead and they looked cool with their masks but you could definitely tell that they were inspired by Slipknot.
Killswitch Engage played a 40 minute set at 7:20pm. The whole band was wearing tuxedo t-shirts on stage and the guitar player had on a silly black cape. They put on a good performance, even playing their version of Dios Holy Diver.” They had some great flames during their set. At one point they asked the crowd to form a wall of death and the biggest mosh pits ensued both on the lawns and the floor. The singer was even taken back for a moment; it was a sight to see.
Slayer hit the stage at 8:30 and did a full metal assault for 60 minutes. During the intro, Slayer logos and pentagrams were lit up and spinning on the white curtain. The guitars were loud, Daves powerful double kick came through and Tom did the traditional hair-twirling. Kerry was as metal as the chain links hanging off of him. They did the standard songs with the addition of their latest cut Psychopathy Red. Born Of Fire and Ghosts Of War were also featured. During Hell Awaits, the top of the Marshall stacks lit up in flames as did the Slayer Eagle logo in the back. It was a great visual that happened again at the end of the set as well. Slayer always puts on a great performance and definitely ruled the festival. Marilyn Manson finished the festival off with a 10pm start time and played just under an hour. I felt he didnt fit the bill well and certainly was the weakest performance I saw. A curtain dropped to reveal the band all dressed up in black including Manson, who had a weird black hat, a razor blade shirt and Hell etc. on his jacket. Twiggy had recently returned to the band, but this time filling his duties on guitar. He is no longer gothic looking. For Irresponsible Hate Anthem Marilyn lead the crowd into the We Hate Love chant and then applied a helmet and the American flag. During Four Rusted Horses, a bible being used suddenly was engulfed in flames. That was the highlight of the whole show for me. Im a convicted sex offender and drug addict, Im Marilyn Manson is how he introduced himself to the crowd. Missing was the over the top theatrics. Instead we got a couple confetti moments, a movie scene recreated on stage with giant spotlights and cue cards, and a cool knife mic being used. The road crew was constantly on the stage and it was very distracting. Manson kept throwing mics down, was brought oxygen between each song and was also supplied with endless beer. He ended up spitting it out everywhere and chucking the bottles into the crowd. It just got so ridiculous in a hurry. He even stated I do not advocate underage drinking or underage sex unless its with Twiggy.” The funniest moment was when Marilyn asked security to remove two guys from the front row and replace them with two topless girls that were actually into the show. During the cover of Sweet Dreams, the stage was lit up with plenty of prayer candles and even his microphone had a fluorescent light built in. No material was played prior to Antichrist Superstar which was really disappointing. This was the worst performance Ive seen from him and he has gone down a steady decline since the last CD.

The turnout for this event was incredible. A near capacity crowd showed that people are interested in keeping metal alive. I thought it was a great success and the only downside was the venue itself that housed some terrible sight lines. Im sure the Mayhem Festival will return for its third year in 2010, its definitely worth checking out. 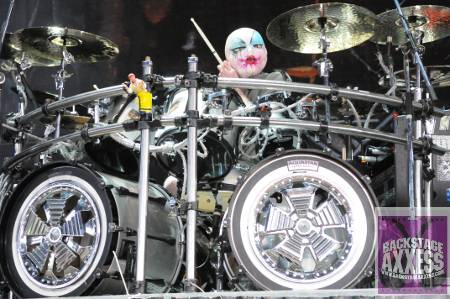 We would like to thank Greg Cortez from B/W/R for allowing us to cover this event. Please stay tuned for a sit down interview with Slayer drummer Dave Lombado straight from the Slayer lair before they took to the stage in Pittsburgh.