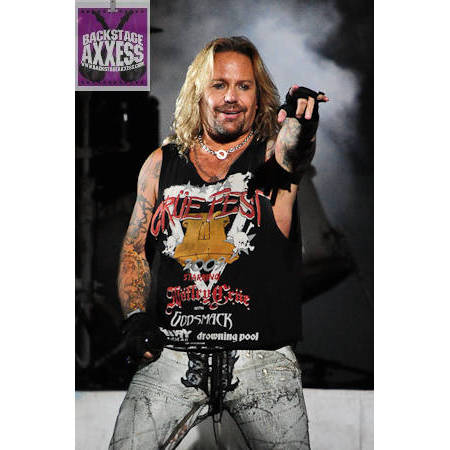 Exactly 20 years ago this week, Motley Crue released their much anticipated Dr. Feelgood. This past Saturday, 20 years later, Motley Crue returned to Darien Lake with a whole bunch of friends.9 bands, 2 stages and well over 16,000 screaming fans, many of whom did not realize that 20 years had passed. Mullets are not all that uncommon at Darien Lake, but WOW.
The Crues stage was set up to look like a hospital hallway or maybe even a padded cell, with its white walls and harsh fluorescent lighting. As Vince and the boys took the stage playing Dr. Feelgood, the venue shook as everyone sang along. As the band entered into Slice of Your Pie, the stage transformed from a small hospital-esque scene into the full-scale stage show we would all expect from Motley.
Tommy was flawless as he returned from his hand injury recently, being back filled by Sevendusts own Morgan Rose for a few dates. Mick Mars wailed despite looking incredibly frail and Nikki laid it down as he strutted slowly across the stage, seemingly tired or maybe just anticipating the ride home as this was the last stop on the tour. Vince really brought an energetic performance to the fans although not being able to hit many of the notes of yesteryear. Together, along with some heavy background vocals, they sounded HUGE when they broke into Rattlesnake Shake and Kickstart My Heart . I dont remember much about the Dr. Feelgood tour 20 years ago (do you?), but tonight Id bet they sounded just as good.
Shortly before Motley hit the stage, fans were treated to a lackluster performance by Godsmack. Opening with Straight Out of Line they sounded great but Sully rarely moved from behind his mic stand. When he did it was only occasionally to face the drummer as he strummed along on rhythm guitar. The bassist and guitar player barely moved either, but the drummer was a flurry of flailing arms, hard hits and inefficient strokes. Just the way I like it. Next was Re-Align followed by Awake, which really got the crowd going with the huge pyrotechnics.
In this reviewers opinion, the Crue Fest 2 VIP award would have to go to Rev Theory who headlined the second stage. They brought enough energy for both stages and really nailed it down.

Dr. Feelgood
Slice of Your Pie
Rattlesnake shake
Kickstart My Heart
Without You
Same Ol’ Situation
Sticky Sweet
She Goes Down
Dont Go Away Mad (Just Go Away)
Time For Change 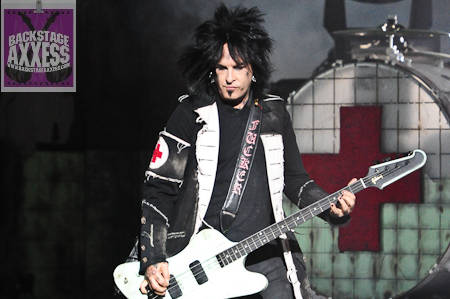 We would like to thank Bailey Vance of 10th Street Entertainment for allowing us to cover the last show of Cruefest 2!