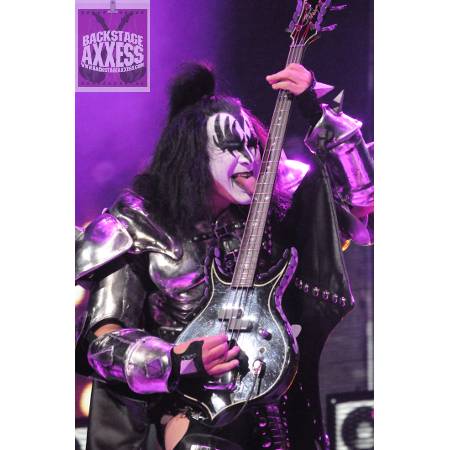 The Big Rock show this fall both opened and closed the famous Cobo Hall Arena in Detroit, Michigan, this past weekend. If you’re wondering what show Im referring to, it’s band that refers to this arena, and this town, as catapulting them into superstar status thats who! That band is none other than KISS. Cobo Hall (now Cobo Arena) has a special part of KISStory in the hearts of KISS fans… it was the location where the 1975 live album, KISS ALIVE, was recorded. This time, they were accompanied by one of todays true great rock bands, Buckcherry. This was the second night and last show ever at the infamous Hall and I couldnt think of a better way to wrap things up than with these two bands.
Buckcherry opened the show and played an amazing 50 minute set that included songs from Black Butterfly, their latest release. The band also played the NASCAR them song for 2009, covering Deep Purples Highway Star. Their infamous Crazy Bitch set the mood for the rest of the night’s festivities with a melody of Billy Squires Stroke Me and The Ohio Players Fire thrown into the song for a good mix. The band sounded extremely tight and it was a great choice for an opener in this writers opinion.
The band that Detroit had been waiting for finally made a return appearance at 8:50pm. KISS came out from underneath the stage in a cloud of smoke and striking the opening chords to “Deuce.” Even though it wasnt a sell out crowd (only spotted empty seats in the top bowl), the crowd was probably louder than the first night. The band was in great spirits and were enjoying their third night in Detroit (they shot their video for Modern Day Delilah and also taped songs for an October 7th Jimmy Kimmel show). The band covered almost the entire Alive album (minus Firehouse and Rock Bottom) and played the new single from the upcoming release Sonic Boom, called “Modern Day Delilah.” If you have been to see a KISS show in the past, many of the same staples were present. If you have not seen KISS before, you’re missing a whole lot. Such as, current Kiss lead guitarist Tommy Thayer shooting rockets out of his guitar, bassist Gene Simmons spitting blood and flying, rhythm guitarist Paul Stanley flying across the arena to give the fans in the back an up close and personal one song show and current KISS drummer Eric Singer getting a “moving” view of arena. In fact, he gets a 360 degree view. You always get the most bang for your buck when you see a KISS show and this show was no different. This show and the previous night’s performance were shot for a future “Live” DVD.
The original KISS members, Paul Stanley and Gene Simmons, seemed ageless. They took the stage with the same level of vigor and excitement that they had during their performances in the 1970’s. The stage show was equally exciting, yet more refined. When this show comes to your town, it is a must see. The physical aspects of Cobo Hall may be ending, but the band and the memories created from the performances here, will last a lifetime! 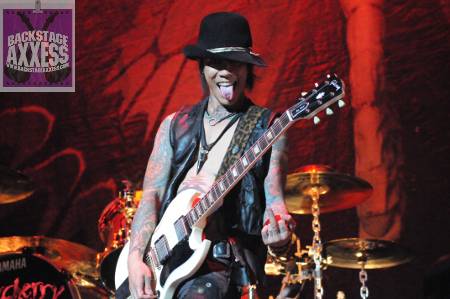 We would like to thank Melissa Madden from McGhee Entertainment for saving the day and allowing Backstageaxxess.com to cover the show! We also like to thank Buckcherry’s Management as well! You can go to www.kissonline.com for details on the current tour.