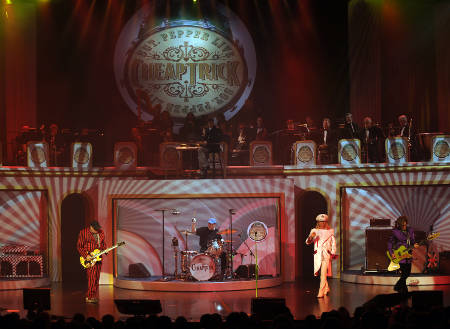 Las Vegas welcomed a 9-show, two week stint of Sgt. Peppers Live featuring Cheap Trick at the Las Vegas Hilton. Besides Cheap Trick, the show also featured artists Ian Ball, Rob Laufer, and Joan Osbourne. Not only were songs performed from Sgt. Pepper, but assorted songs throughout the entire Beatles catalog were also showcased. During the song Across the Universe, that featured Rob Laufer on vocals, he was also accompanied by the Clark County Childrens Choir who did a magnificent job with the background harmonies. One of the highlights of the evening was Joan Osbournes Cant Buy Me Love. It was a fantastic performance all around and the song was delivered superbly. Throughout Drive My Car, the conductor was be-bopping around playing the cowbell as the ensemble sat quietly. It was a funny moment and showed that everyone had something to contribute to the show.
But what everyone was anxiously awaiting was the appearance of legendary American band, Cheap Trick. As the stage revolved, their desire was fulfilled as Robin Zander and Co. took the stage and belted out the title track from the show. Guitarist, Bill Lloyd, stayed out to provide rhythm guitar for all the tracks Cheap Trick performed during their part of the show. Singer, Robin Zander, dressed in all white, including a heavy coat and captains hat, showed his vocal prowess as he delighted fans with his performance of these classic tunes. Guitarist Rick Nielson interacted with the audience the entire night by talking to them between songs and ejecting picks into the audience.
What was more special about this show than the others is that Joe Elliot, lead singer of Def Leppard, joined the band onstage for Lucy in the Sky with Diamonds and All You Need is Love. This was totally unexpected, as reported by people associated with the show, providing a real treat for all who were in attendance.
Overall, it was a very cool concept that went over well, judging by the performance and crowd reaction. Maybe this could be the start of a new trend that other bands can run with, in doing something similar with other classic albums from other bands. 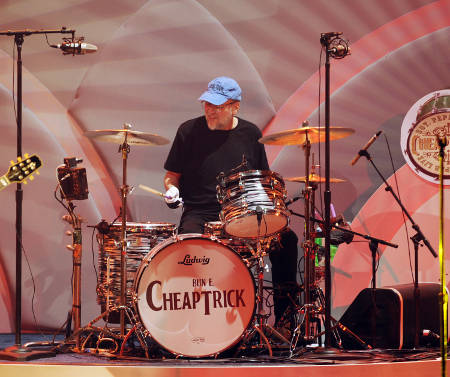 All photos by Denise Truscello.

We would like to thank the ladies at PR Plus in Las Vegas for allowing us to cover this special show.