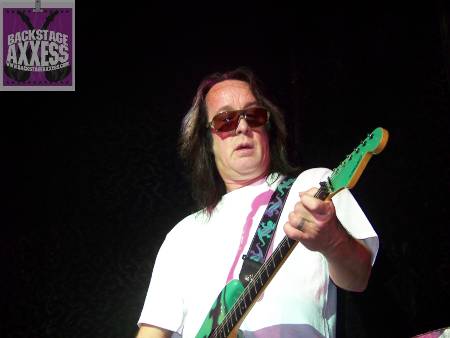 Over the last two years, Todd Rundgren has been touring in support of his most recent release “Arena,” an album that pays homage to the arena rock era. The tour featured “Arena” played in its entirety and may have been the impetus for some fans to call for Rundgren to play a classic release like the ambitious fan favorite from 1973 “A Wizard a True Star.”
Monday night September 7 at the Akron Civic Center Theater in Akron, Ohio was the second night of the premiere performances of AWATS- as Rundgren fans refer to the album. Aside from a few technical glitches early on that caused Rundgren to comment that “this was the show I thought we would have done last night,” the performance was nothing short of spectacular.
However, the performance of AWATS was only part of the story. On Sunday night, the word was out that the “secret” opening act turned out to be none other than of the classic lineup of Utopia, a band Rundgren formed in the 1970s. Former Tube’s drummer and longtime Rundgren collaborator Prairie Prince replaced original drummer/vocalist Willie Wilcox, whose presence was missed but did not dampen the significance of the event.
At Monday night’s performance, the band appeared in white t-shirts and black jeans in front of the stage curtain. They opened with “Road to Utopia.” Although Rundgren and Utopia bass player Kasim Sulton play the occasional Utopia song when they tour together, songs sung by keyboardist Roger Powell like “Abandon City” and “Caravan” have not been performed live since a short reunion tour in 1993. Other Utopia classics like “Libertine,” and ” Last of the New Wave Riders,” were greeted with roars of approval from the crowd.
Later in the evening, the curtain rose and revealed the all-star ensemble dressed in white tuxedos and Rundgren appearing in a giant space suit singing “International Feel.” It was one of eight costume changes that either touched on a theme from AWATS or was something Rundgren wore earlier in his career.
Rundgren also broke out a replica of a Gibson SG that was painted by “The Fool.” Eric Clapton once owned the original version of the guitar and used it to record the Cream classic “Sunshine of Your Love.” Rundgren used the guitar on tour for many years so seeing him sporting even a replica of it was quite a treat.
As promised, Rundgren tweaked the running order of AWATS moving When the Shit Hits the Fan/Sunset Boulevard and Le Feel Internacionale to the end of the show. Rundgren then exited the stage and encored with a tremendous version of the albums closing number Just One Victory.
The Monday show finished a weekend filled with events in and around the Akron area for Rundgren fans including a huge fan party Saturday, a solo performance from Kasim Sulton Sunday afternoon and a meet and greet at the Rock and Roll Hall of Fame on Monday afternoon.

International Feel
Never Never Land
Tic Tic Tic, It Wears Off
You Need Your Head
Rock and Roll Pussy
Dogfight Giggle
You Dont Have to Camp Around
Flamingo
Zen Archer
Just Another Onionhead
Sometimes I Dont Know What to Feel
Does Anybody Love You
Medley
Im So Proud
Ooh Baby Baby
La La La Means I Love You
Cool Jerk
Hungry for Love
I Dont Want to Tie You Down
Is It My Name
When the Shit Hits the Fan/Sunset Boulevard
Le Feel Internacionale 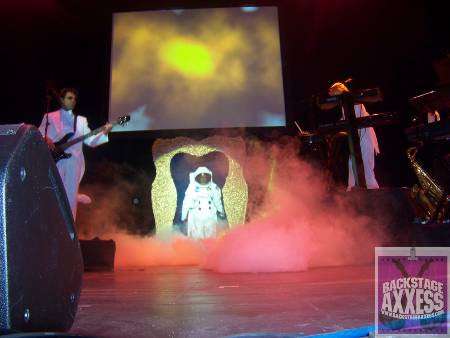 We would like to thank Mary Lou Arnold for allowing us to cover the show.