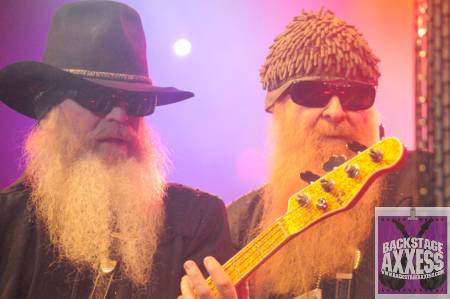 Famous for their long beards and Texas Boogie-Blues-Rock, the little ol’ band from Texas is still rockin’ – ZZ Top graced the stage for a sold-out show on Thursday, September 17, 2009, at the Seneca Allegany Events Center, inside the Seneca Allegany Casino, in Salamanca, NY. The lights went down shortly after 7pm and Billy Gibbons (guitar/vocals), Dusty Hill (Bass, vocals) and Frank Beard (the only one without a beard, on the drums) opened the show with “Got Me Under Pressure.” Formed in 1969, the same three guys are still playing hit after hit in timeless fashion. Before performing “Nationwide,” Billy Gibbons announced some rules. “Rule #1 is: No drinking during gospel songs. Rule #2 is: No gospel songs.” This band knows how to relate to its audience and bring fun to the stage. A couple of women even joined them before “Future Blues” to bring out Billy’s ‘blues’ hat. Then it was time to put on the “Cheap Sunglasses.” Billy and Dusty slowed things down to step in time at the end of the song and then went into the true story of the “Mexican Blackbird.” Later, a tremendously executed cover of “Foxy Lady” by Jimi Hendrix wowed the crowd. Note for note, Billy Gibbons’ guitar playing was right on. The stage was lit up with chrome microphone stands that looked like smoke stacks from a big rig. The band continuously engaged the audience in stories and songs. Billy and Dusty brought out their signature white shag carpeted guitars to visually highlight the song “Legs” as Frank Beard was busy keeping the beat. The nearly 90 minute set wrapped up with an extended version of “Tush.” The capacity crowd of 2500 boogied and sang along until the seemingly ageless trio left the stage.
If this little ol’ band from Texas makes a stop in your town, don’t miss out. You won’t be disappointed and you’ll certainly find yourself singing along to some classics. 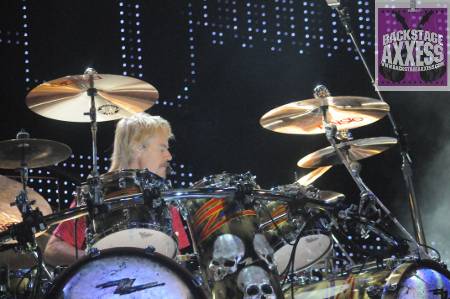 We would like to thank the Seneca Alleghany Casino for allowing us to cover the show.