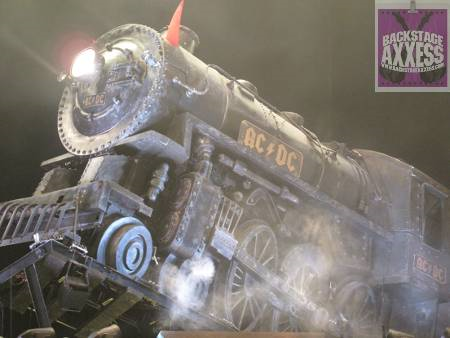 For the first time in over 13 years, AC/DC made an appearance in Buffalo, NY, to an almost capacity crowd in support of their latest effort Black Ice. The lights went dim at approximately 8:45pm, as a video of Angus on a train showed up on video screen. The train that couldnt stop ended up crashing into the HSBC arena. The curtain dropped amid smoke and a train, that was positioned on the back of the stage, with Angus and the rest of the band kicking into the first single from Black Ice, Rock and Roll Train.
You probably wont see a cooler intro from any other act than this. It was an exciting and interesting entrance that really got the crowd into it. Besides the opening song, AC/DC played 5 songs off of Black Ice. There were no fillers during the set as all these songs flowed very smoothly into the set list that also carried the likes of Hell’s Bells, TNT and “Shoot to Thrill. Singer Brian Johnson did ring the AC/DC bell that dropped before Hell’s Bells was started. An inflatable woman was inflated during the song Whole Lotta Rosie. Guitarist Angus Young also did his striptease act during The Jack” to show his best pair of AC/DC underwear underneath. During Let There Be Rock,” a video montage off all the previous covers of their past albums graced the stage. It was a cool and fitting tribute to the band’s legacy.
While wrapping up this almost 2 hour onslaught, Angus did an extended solo at the end of For Those About to Rock, which closed the show. He ended up going to the end of the runway, which rose to him, playing with a nice shower of confetti to join him. Selling over 22 million albums of Back in Black and becoming the greatest hard rock selling act of all time has not gone to the heads of these guys. They truly were in great spirits and played like it was one of their first gigs back in Australia. Displaying that hunger and willingness to do what it takes to make it. A true testament on how rock and roll should be. A lesson to be learned by other bands for sure!

Encores:
Highway to Hell
For Those About to Rock (We Salute You) Angus guitar solo 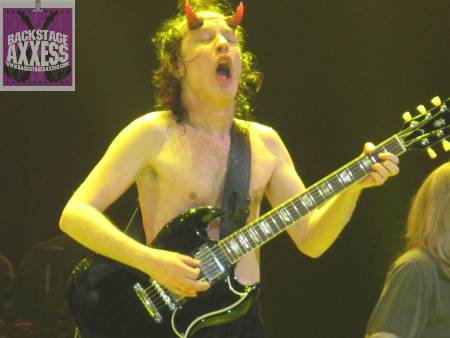