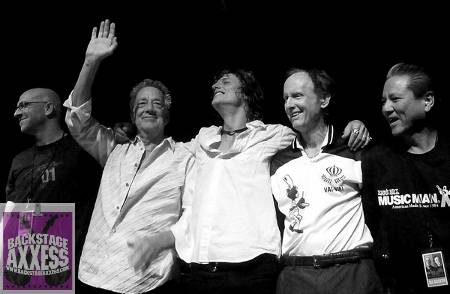 I have been a Doors fan since I saw The Doors movie when it came out and Jim was a colorful and cool character to me. I love the music and I was fortunate enough to see Robby Krieger back when he was playing with his son at Arizona Charlies. It was an incredible show, but it wasn’t as cool as seeing him play with his old band mate Ray Manzarak. So when I found out they were playing together at the Wasted Space with the singer from Fuel, Brett Scallions, I had to see this show.
They can’t call themselves “The Doors” or “The Doors of the 21st Century” anymore as they did when they toured with Ian Astbury, because of losing a lawsuit to former drummer John Densmore. So they just call it by their names now. They round the band out with their touring bassist, Phil Chen and the drummer from a Doors tribute band, Peace Frog, named Ty Dennis.
I took my good friend Alan to see this show because he is a huge fan and he would have killed to see them, as he has never seen them perform together. We get in courtesy of a cool doorman (which is not the norm in Vegas) and slide right up front to the stage with my buddies Don and Corey. We were so close that we would be able to touch them. I was right on the stage. So after a few libations and about an hour wait, the place fills up and people are getting close.
I didn’t know what to expect from this singer from Fuel, but when they came out to a cheering audience and steam rolled into “Love me Two Times” I knew we were in for a wild ride with these legendary rockers that blew people’s mind’s back in the 60’s! Robby and Ray got to do some stylish solo’s and then they broke out ” Break On Through” and kicked our asses into high gear! Everyone was dancing and singing and then came the intro to “Love Her Madly” and we all went crazy! I have to say this was an awesome threesome to open up a show! Then came the opening to “When the Music’s Over” and the energy shifted to a mellow energy and everyone started to sway. Next, they played a couple of songs I didn’t know called “Peace Frog” and “Waiting For the Sun”, which only die-hard fans knew. They rocked a drinking song called “Alabama Song” which was more upbeat and another I did not know. But after that, I recognized the groovin “Backdoor Man” and we all started to dance again.
Brett Scallions did an incredible job singing and I swear, if you would have closed your eyes, you could hear and feel Jim Morrison in the room with us. His spirit would have been dancing with us during “Five To One”. Robby broke out an acoustic guitar and began doing some flamenco fretwork and segued into “Spanish Caravan” with the poem “The Changeling” that was very beautiful. When they played “Soft Parade” another drummer joined Ty and they jammed some killer beats. The band was a tight knit group and they kicked it up a notch with “Touch Me” as the crowd was drinking in the energy that they were creating and singing every word. They finished the set with my fave “LA Woman” and we all just rocked and rolled and enjoyed every minute of this divine music.
They left the stage and came back quickly and started the two encore set with “People Are Strange” which everyone sang and swooned to. They rounded out this incredible set with Ray showing off his magic fingers that are still limber with “Light My Fire” which was their biggest hit. These guys were just so amazing and I felt like this show was a spiritual experience. The energy was palpable and the people thoroughly enjoyed it all around me. They also played Sunday night as I stood by the open front door I was able to hear “Riders On the Storm” a song I adore and one they didn’t play the night before. These guys have kept open the Doors of perception with their music for over 40 years. The music and Jim will live on forever in our hearts. 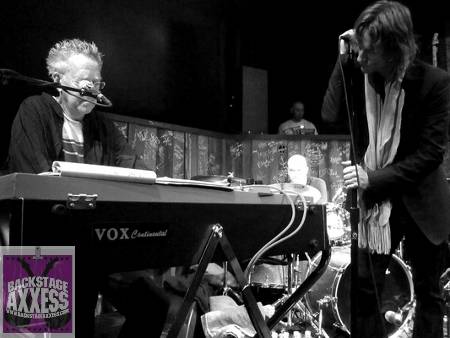