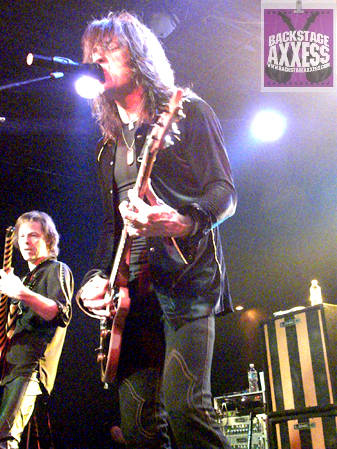 The Yellow and Black Attack is back! Christian rock legends Stryper, who are currently on their 25th Anniversary Tour, played to a sold out crowd in Dayton, OH, this past Saturday night. The tour was originally planned to feature two sets one of recent Stryper material (featuring current bassist Tracy Ferrie) and one of Stryper classics, with original bassist Tim Gaines, but Ferrie bowed out due to personal reasons. The band decided to combine the sets and perform with the original four members.
The lack of parking near the venue was the first clue that it was going to be an interesting evening. The advertised show time of 9:00 was apparently changed as Manic Drive had already played when I arrived at 8:45. Flight Patterns, featuring Mike Sweet Jr. on guitar and backing vocals, came on shortly after and played a thirty minute set. Their pop-punk / emo sound was well received by the packed house, but you could tell that the crowd was ready for the headliner.
As the lights dimmed and the fog rolled out from behind the stage, yellow stripes could be seen approaching through the darkness. The band hit the stage wearing current, laid back versions of their classic 80s stage outfits and immediately launched into the title track of their 1985 breakthrough album, Soldiers Under Command. Following the title track of their current release, Murder By Pride, the band delivered a half-dozen of their most well-known songs. Prior to Calling On You, vocalist Michael Sweet plugged the new movie Whip It, which features a few appearances of a Stryper To Hell With The Devil t-shirt. After “More Than A Man”, Sweet called his brother Robert down from his sideways drum set to help toss Bibles into the crowd. He told an amusing story about how people used to leave them on the floor until the band started putting Stryper stickers on the covers. All plugs and stories aside, Stryper sounded phenomenal. They were loud, tight and firing on all cylinders!
Before the next song, a cover of Boston s Peace Of Mind, Sweet recalled the steps that led to him joining that very band in 2007. Strypers version is just as good as the original, with guitarist Oz Fox and bassist Tim Gaines supplying the spot-on backing vocals needed for such a song. As the band focused on the harder material from throughout their career, including All For One from 1990s Against The Law and Open Your Eyes from 2005s Reborn, they found time to slow things down for their biggest hit, Honestly. Sweet thanked the crowd for all of their support following the recent loss of his wife, yet assured everyone that he was comforted knowing that she was at peace.
Closing the main set out with The Way, the band disappeared momentarily as Abyss signaled the impending finale of To Hell With The Devil. The band waved goodbye to the enthusiastic yet exhausted crowd, having given an amazing eighty-minute performance that was one of the best shows I have seen all year. Dont miss Stryper if they are scheduled to hit your town!

Abyss
To Hell With The Devil 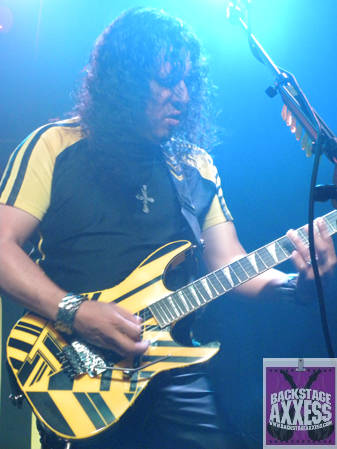