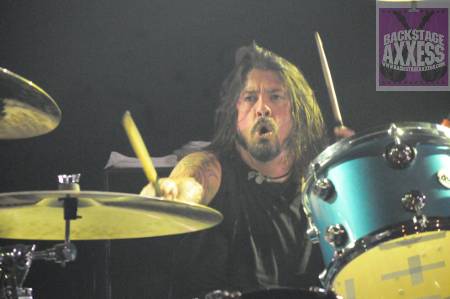 The next super group project, slowly getting around by word of mouth, is Them Crooked Vultures. The band consists of John Paul Jones (Led Zeppelin), Josh Homme (Queens of the Stone Age), and Dave Grohl (Foo Fighters). When touring, the band will have Alain Johannes as a rhythm guitarist (also from Queens of the Stone Age). This project is playing some limited dates throughout North America and stopped by the Sound Academy in Toronto this past Friday night. The band has not officially released any singles to radio or a full length album to stores as of yet. Still, with the drawing power of these musicians, tickets to this show sold out in seconds.
The band played an 80 minute set (with no encores) and stuck with original music throughout the entire evening. This was my first “live” encounter with legendary bassist John Paul Jones and he surely did not disappoint. He played a variety of instruments throughout the evening. With the backing of Dave Grohl, the rhythm section sounded amazing the entire night. Dave is simply an amazing drummer and a beast up there. Its great to see him back behind the kit to show off his proficiency pounding the skins. Joshs vocals needed to be turned up some as it was hard to make out what he was singing. Since very few people knew the songs, the low vocal level made it harder to follow along. Josh left the guitar to the side and sang the song Interlude with Ludes. It was the only tune of the entire set where this happened. One of the best numbers of the night was a song Caligulove. Daves drumming was bombastic and John Paul Jones scintillating keyboards made this one of the highlights of the evening.
Maybe this is a choreographed move on the part of the band to play in front of audiences without the fans having prior knowledge of the band’s music. This seems like a bold move that may pay off in the long run as I, for one, was certainly curious to hear the finished product! 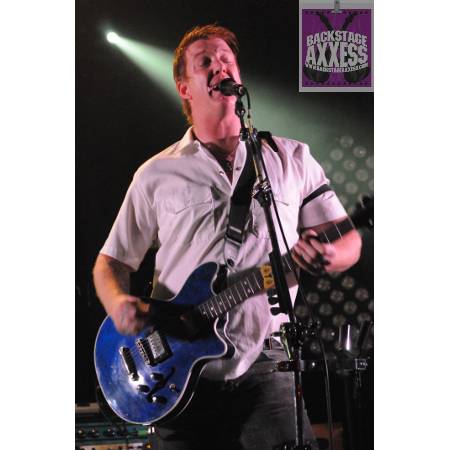