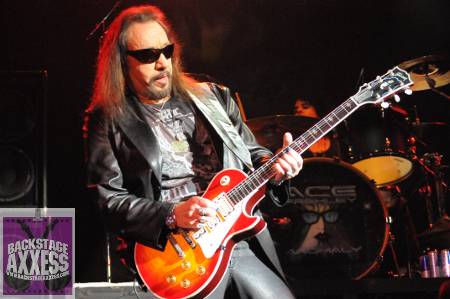 The Ace man cometh and touched down at the House of Blues in Cleveland on one of his stops in support of his latest solo release Anomaly. Ace and his band consist of: Derrick Hawkins on guitar, Anthony Esposito on bass and Scott Coogan on drums. This is the same band he previously toured with in 2008. Ace took the stage to the background music of Fractured Mirror and kicked into the KISS staple Shout it Out Loud.
The stage was complete with a backdrop of the new CD Anomaly and blue cabinet speakers to give an Outer Space vibe to it. The band was in matching jumpsuits with their respective names on them. Ace was in great spirits and the band sounded surprisingly tight considering that they only played a handful of shows to this point. An hour and a half set included 3 songs from the new CD, KISS classics, and past solo material. The staples of an Ace show were there with the smoking guitar during Shock Me, and the light up guitar during NY Groove. During the solo of Shock Me, Ace went right into Rocket Ride and then proceeded to wrap up the set with Deuce. Before kicking into the KISS classic, Ace asked if there were any Tommy Thayer (The current KISS Lead Guitarist) fans in the house? A well rounded chorus of boos soon followed.
As stated before, Ace used the smoking guitar during Shock Me. Well, he also used another version of it during the last song of the encore Cold Gin. I never saw him use it more than once at any show he was involved in. So that was a real treat! During “Cold Gin,” the band incorporated a riff from part of Black Diamond.
Backstageaxxess.com was lucky to catch Ace in such an intimate setting. I would say the almost capacity crowd in attendance would certainly have to agree with me.
Set List: 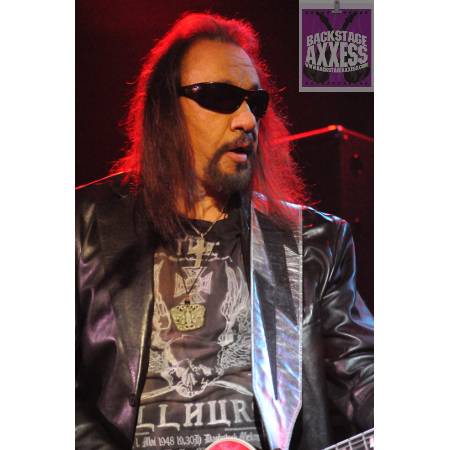 We would like to give a BIG THANK YOU to Kymm Britton for allowing us to cover the show. For more information on Ace and where he will be touring next, you can go to: http://www.acefrehley.com/