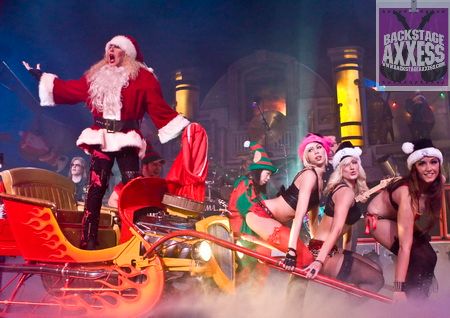 I have been a huge fan of Twisted Sister since the early 80’s when videos like “Were Not Gonna Take It” and “I Wanna Rock” blew up MTV and gave us Head Banger’s the power of music to stand up for ourselves and give authority figures the finger. Twisted Sister has always been a “Fuck Authority” band since their beginnings in NYC in mid 1970’s, when they would play gigs in lingerie. That was before the more commercial album Stay Hungry came out in 1984 and they became more like comic book characters at that point. I always loved their music especially the stuff you didn’t hear on the radio. I have always loved Dee Snider, a very underrated singer that still is one of the most entertaining front men in Rock n Roll or Metal today. The man can seriously belt it out and just blow your mind at the same time with his powerful stage presence. I respect the man for what he did for rock and metal music in general during the PMRC hearings back in 1985. Dee spoke in front of Congress in a very clear and intelligent way looking like a total rocker freak was awe so inspiring to a kid like me at the time. I was blown away!!
Flash forward about 24 years later and Twisted Sister is still around with all five original band members: Dee Snider, Jay Jay French, Eddie Ojeda, A.J. Pero and Mark The Animal Mendoza. They not only still tour, but in 2006 released A Twisted Christmas CD to overwhelming success. This show; “TWISTED SISTER PRESENTS A TWISTED CHRISTMAS” was inspired by this release. The set and stage designs were created with the help of New Yorks legendary School of Visual Arts. A TWISTED CHRISTMAS is a Rock N Roll theatrical spectacle designed to kick off the holiday season with a brutal assault of lights, sound and staging. They played three nights at the world famous Hilton Hotel in Vegas in the theater that Elvis made famous. They played the same week as Wynona Judd and Andy Williams and Dee joked about that in the show.
The stage was decked out with boughs of holly. Jolly elves came out between songs to clean the snow that fell from the rafters off the stage as drummer AJ Pero proceeded to chuck sticks and stuff at them at the same time. The show started with Dee Snider coming out in full Santa regalia in a sleigh being pulled by 3 beautiful women as the as “Have Yourself a Merry Little Christmas” was kicked into. The set was songs from the bands Christmas album with their hits sprinkled in. One thing that I thought was hysterical was that this is a Christmas show in Vegas right? Well there were a lot of elderly folks that bought tickets or got comped from the casino. Most these people did not know what they were in for and when Dee busted into “Burn in Hell” the look of shock on their faces was priceless! I thought some people were going to have a heart attack! It was the funniest thing I saw that night but Dee ended winning over them by the end of the night (the ones that stayed.) Dee was telling them to get up and “Get into it!!” I saw a man about 90 up on his feet and clapping! That was classic! Then Satan Clause came out and gave all the band members presents and the funniest one was the one Dee received (a Huge lipstick and he remarked that his wife would be happy later.) At the end they did “A Heavy Metal Christmas”, which was a take on the 12 days of Christmas. It was pretty hysterical as the guys held up signs like “Five Skull Earrings” as a huge Statue of Ozzy rolled across the stage. These guys have a serious funny bone and I laughed and rocked through the entire show.
Twisted Sister show no signs of slowing down and I for one am happy to have them still around and in our face giving us the finger!!!

Were Not Gonna Take it 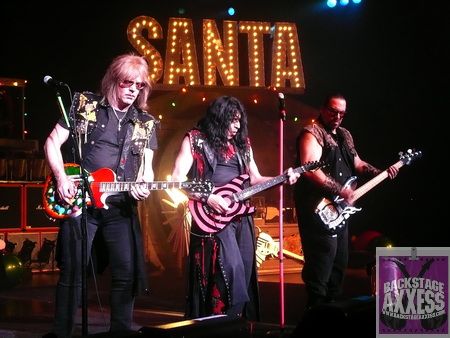 We would like to thank Janie Hoffman of all things possible for allowing us to cover the show. For more information on Twisted Sister, you can go to: www.twistedsister.com