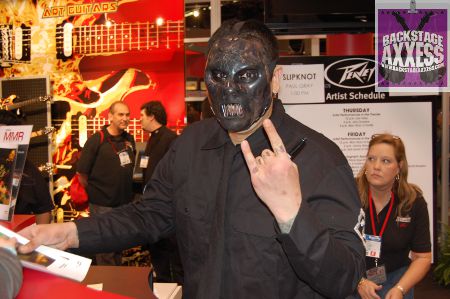 According to the Des Moines Register, Urbandale, Iowa police are investigating the death of SLIPKNOT’s bass guitarist at a local hotel.  Paul Dedrick Gray, 38, of Johnston was found dead at approximately 10:50 a.m. today by an employee at TownePlace Suites (pictured above), 8800 Northpark Drive, police said.

There was no evidence of foul play, police said.

According to KCCI.com, the Polk County Medical Examiner’s Office is assisting in the death investigation and will perform an autopsy on Tuesday. Toxicology testing will be completed to determine if there were any contributing factors in the death of Gray, police said.
Witnesses reported that items from the hotel room were carried out of the hotel around 2 p.m.

Gray was born in Los Angeles, California, and later moved to Des Moines.

Wikipedia shows that Gray has been married for two years to GodsGirls’ Brenna Paul and has a tattoo of her name on his knuckles.

In a December 2009 posting on his MySpace page, Gray revealed that his wife was pregnant with the couple’s first child. “I am the happiest man on the face of the earth — literally!” he wrote. He added, “This has been the best Christmas I have ever had!”

In April 2010 it was announced that Paul Gray had joined HAIL!, the supergroup featuring mainstays Tim “Ripper” Owens (BEYOND FEAR, YNGWIE MALMSTEEN, ex-JUDAS PRIEST, ICED EARTH), David Ellefson (MEGADETH) and Andreas Kisser (SEPULTURA). He was replacing the group’s original member, David Ellefson, who was unable to take part in HAIL!’s upcoming touring activities due to his renewed collaboration with MEGADETH. At the time, Paul Gray stated about his involvement with HAIL!: “This is going to be amazing! After I heard the news about David reuniting with MEGADETH I touched base with Andreas and everything fell into place pretty immediately. I was excited about what they were doing and their whole attitude is just cool, old school camaraderie and fun and I wanted to share that with them. Fortunately, I had this window of time available as SLIPKNOT are on break so the timing worked perfectly. These guys have been through it all and they represent true metal brotherhood. I like that and I’m glad to now be a part of it. I can’t wait, I wish we’d leave tomorrow. These shows are going to kick ass!”