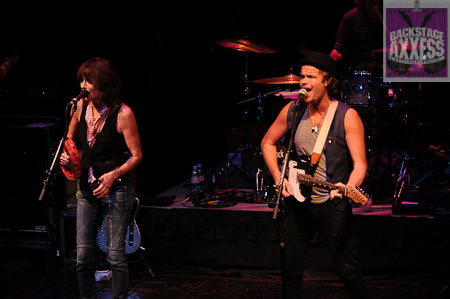 ­     It isn’t often one gets the opportunity to see a Rock and Roll Hall of Famer in an intimate setting, and The Bears Den at the Seneca Niagara Casino is as intimate as it gets. The 443 seat showroom is this reviewers favorite place to see a show, and getting to see a performer of Chrissie Hynde’s stature was quite a treat. Hynde appeared at the Bear’s Den as part of JP, Chrissie and the Fairground Boys in support of their debut album, “Fidelity!” Undoubtedly there were curiosity seekers in the audience, at the show to see Hynde and not sure what to expect from the rest of the band. If they wanted an evening of Pretenders classics, they surely left disappointed.
­     Indeed, it did seem like there were a few people in the crowd who just did not get it, and they missed a great night of music. While “Fidelity!” is not a high-octane rocking album, it is a wonderful collection of songs that are strong lyrically and musically. To appreciate that, you need a little background on the relationship between JP and Chrissie, which is the subject of the album.
The first half of the show featured mostly mid-tempo numbers. The band opened with “If You Were My Age,” a song that does not appear on the album, but does encapsulate the major problem in JP and Chrissie’s relationship, their age difference. The second, third and fourth song of the set mirrored the album’s running order, with “If You Let Me,” “Fairground Luck” and “Australia,” all played well and featuring some excellent guitar work from Patrick Murdoch, whose reverb-heavy tone is an interesting combination of Chris Issac and Richard Thompson.
­     Hynde’s presence on the stage could have been a distraction, looking more like she was sitting in with a band than actually part of it, but it wasn’t. The band sounded like a band, a unit that jelled through the intricate numbers, but really came together on what was the best song of the night, “Portobello Road.” The only bad thing that can be said about “Portobello Road” is that it is not on “Fidelity!”
­     Hynde noticed some people had left the venue early and quipped that the show must not have been “rockin’ enough.” If they did leave before “Portobello Road,” they missed not only the evenings musical climax, they missed great versions of the album’s title cut, a solid cover version of Moby Grape’s “Murder in My Heart for the Judge,” and the triumphant “Christmas Song” which is a bonus track available as a download.
­     It remains to be seen if this is a one-off project for Hynde and JP, but if they do record another album of material they will be an even better live act and may be able to build a fan base of their own. In the meantime, make sure you catch them if they are in town.

We would like to thank Tony Astran from the Seneca Niagara Casino for allowing BackstageAxxess to review the show.