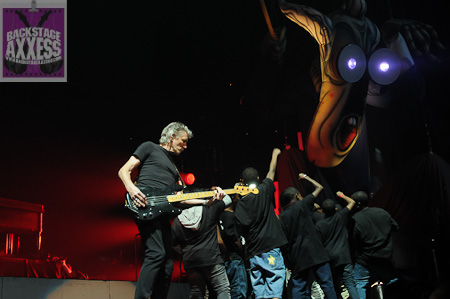 ­     One of the most significant albums of the 20th Century was unquestionably Pink Floyds The Wall. When original bassist and mastermind of the legendary recording, Roger Waters, announced that he was going to launch a 30-year anniversary tour, it instantly became the hottest ticket of the entire year. Rogers band is comprised of Graham Broad on drums, Dave Kilminster, Snowy White, and G.E. Smith on guitars, Jon Carin and Harry Waters (Rogers son) on keyboards, Jon Joyce, Mark Lennon, Michael Lennon, and Kipp Lennon on background vocals. Vocalist Robbie Wycoff shared lead vocal duties with Roger throughout the performance. If one has never experienced The Wall, either live or the movie version, its a story that encompasses the many trials and tribulations inside a boys psychotic mind.
­     The first part of the set is strictly comprised of songs that build up The Wall. The sturdy cardboard boxes that depicted bricks were assembled throughout part one of the performance. The projection screens used were beyond amazing! It perfectly focused in on the graphics of a particular brick without any overspill onto another brick. The theatrical aspects of the show featured young locals who came out to dance while trying to shoo away the inflatable monster during Another Brick in the Wall Part 2.
­     Wycoff and Waters traded vocals during Young Lust, and Waters delivered a remarkable acapella performance on One of My Turns. However, Waters voice seemed not to hold up as well in comparison to the last time I saw him when he performed Dark Side of the Moon in 2007. But, his enthusiasm for being there and the overall production satisfactorily covered any vocal blemishes.
A half hour break adjoined the sets as the band came back out to play Hey You behind the completed wall. As part of the wall flipped down, Roger appeared within a living room type setting as he sang Nobody’s Home. An oversized inflatable remote- controlled pig flew around for a couple of songs; Comfortably Numb and The Show Must Go On. Roger then proceeded to put on a large black leather trench coat for In the Flesh while his backup vocalists all wore coats and shades and moved simultaneously throughout the song. The 1 hour and 55 minute epic came to a close with the dismantling of The Wall as the band emerged to play the fitting finale Outside of the Wall.
­     Again, this was more about a story being told than an actual concert performance. The band of talented musicians Roger put together was an impressive sounding outfit. I, personally, was thankful and privileged to witness this album performed live in its entirety. I’m just wondering if the people who spent $225.00 per ticket for the best seats in the house had the same feeling that I did?

Hey You
Is There Anybody out there?
Nobody Home
Vera
Bring the Boys Back Home
Comfortably Numb
The Show Must Go On
In the Flesh
Run Like Hell
Waiting for the Worms
Stop
The Trial
Outside the Wall


We would like to thank Dariel Abramowitz from Sony Music for allowing BackstageAxxess to review the show.