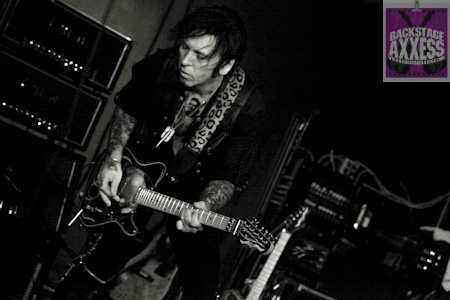 This version of L.A. Guns featuring original guitarist Tracii Guns are on tour in support of their latest offering Acoustic Gypsy Live. However, this concert was not acoustic and featured an all-new line-up since Jizzy Pearl had departed the band shortly before the album release and tour. It was a ballsy move for Tracii to have a female front the band but Dilana Robichaux fit in quite nicely I would have to say. Known for her participation on the show Rock Star Supernova, this heavily tattooed, Harley riding singer can pull it off and then some. Joining Dilana as the newest members of Tracii Gun’s L.A. Guns is bassist Eric Grossman of Ks Choice fame. Rounding out the quartet is L.A. musician Doni Gray on drums.

After being held up at the border and arriving late, Tracii, Eric and Doni started the night off with an instrumental jam allowing for a proper sound check before Dilana jumped in for Over The Edge. Tracii dressed all in black, had his shirt open revealing a tattoo of Johnny Cash on his chest that he just got inked days prior in Michigan. Dilana talked about how she loves Canada and showed the crowd two tattoos that she got while in British Columbia. The newly added Crystal Eyes to the set was a highlight as it featured Dilana on acoustic guitar (the one given to her on the TV show and signed by the participants) and had a great acappella intro. Tracii was playing his own signature Nash Vegas Dean guitar on stage, and his amps were cranked throughout the 80min set. Someone stole all our set lists last night so were fucked Dilana joked as the band winged it at times. My Drug and Holiday were two originals performed from Dilana’s catalog. You think we would have gotten a guitar solo but instead we got a great bass solo, which showcased the funky styles of St. Louis native Grossman. One More Reason, No Mercy, and Rip And Tear were performed fast and furious and really showed that this line-up can rock. And if that wasnt heavy enough the band returned for an encore with the hard hitting Waking The Dead. Unsure what to do next, fans screamed out Electric Gypsy and Tracii said oh yah and started the song. Thats the one song I cant get the lyrics stuck in my head Dilana joked. Concluding the night was Sex Action which featured Led Zeppelins Whole Lotta Love in the middle and a tiny snippet of Paint It Black by the Rolling Stones at the tail end. After the show, a funny thing happened while I was at the merch table. There were no L.A. Guns shirts and only two CDs for sale while Dilana had shirts, CDs, a bag and more for sale, someone dropped the ball there.

Fans have wanted a L.A. Guns reunion with Phil Lewis and Tracii in the same line-up including myself for years now but until that happens, this Dilana and Tracii collaboration really works. Do yourself a favor and check this line-up out when they play your city.

We would like to thank Kayos Productions for allowing Backstageaxxess.com to review the show.