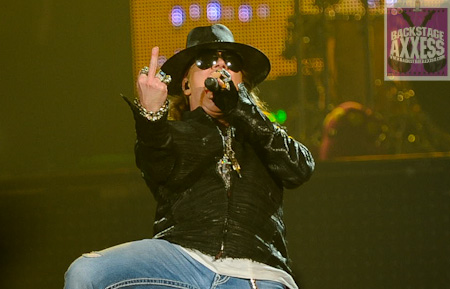 I have to start off by saying getting inside Copps Coliseum was a challenge due to the time consuming task of a full body pat down search to eliminate all cameras and recording devices. The general admission floor patrons had a separate entrance, which went a lot quicker.
The opening band, which was only confirmed a week before the show, was The Pretty Reckless. Led by actress Taylor Momsen of Gossip Girl fame, the singer and her band hit the stage at 9:15pm. Eighteen-year-old Taylor, dressed up in black lingerie, high-heeled boots and a leather jacket, used her sexiness to entertain the crowd, but make no mistake, she can certainly sing. The 55-minute set featured all but one song from their debut release Light Me Up and two covers were thrown in, Audioslaves Like A Stone and Seven Nation Army by The White Stripes. She slapped on a guitar to play during My Medicine and interacted very well with the crowd.
Guns N Roses were scheduled to go on at 10:30pm, but at that time, the stage crew started to completely mop the stage. I got a little worried, as Axl is known to be up to two hours late, luckily the lights went off 15 minutes later. After an intro featuring the Dexter TV show theme, DJ Ashba stood on top of a road case behind the drums and strummed the opening riff to Chinese Democracy and the show was on.
The band featured the same line-up as their previous performance at this venue back in January of 2010. The stage was pretty much the same, just slightly scaled back as the elevated lift was gone, along with the three catwalks and some of the lighting. Axl wore blue jeans, sunglasses and a bandanna the whole show and had three hat and jacket changes. His voice was solid throughout the 2 hour and 45 minute performance. Lots of pyro, including flames and fireworks, along with visuals on seven video screens, enhanced the experience. There were several discounted ticket offers including a 2 for 1 offer to attract fans to come out to this show. Only the lower half of the venue was used, which saw about 4500 people in attendance. Based on the late start times and the fact that Axl is the only original member of the band, people are starting to lose interest. Not to take away from his, and the bands, performance because its still a great top-notch production. The Appetite For Destruction songs were the big hits, obviously, and got the most reaction. This time around three “Chinese Democracy” songs were dropped from the set and added from the old days were Estranged, Dont Cry and Patience. Also new was Sonic Reducer by the Dead Boys, sang by bassist Tommy Stinson and Axl had fun with AC/DCs Riff Raff”.
At one point, Axl said in reference to his white cowboy hat, I thought Id let you know, not that you would really care, this is a Canadian cowboy hat, it really is.” After 2 hours and 10 minutes, the encore break came and a noticeable amount of people started heading home being it was 1am. Madagascar featured DJ Ashba on extra percussion at the beginning and then he playfully threw four drumsticks into the crowd after using them as bows on his guitar. He was really working the stage all night. He was running and jumping all over while frequently smoking cigarettes. Before Better, Rose joked around about his glow in the dark shirt he was wearing at the time. The traditional last song Paradise City had red confetti floating about and Axl throwing his cordless microphone to a lucky fan for a keepsake. After going off stage for a moment, the band returned with a couple of cases of water and threw the water bottles into the crowd before taking a final bow. Axl thanked the crowd and the show concluded at 1:35am. Frank Sinatras My Way played as the remaining fans dispersed out into the cold November rain.

We would like to thank Kymm Britton from 60 Cycle Media for allowing Backstageaxxess.com to review the show.