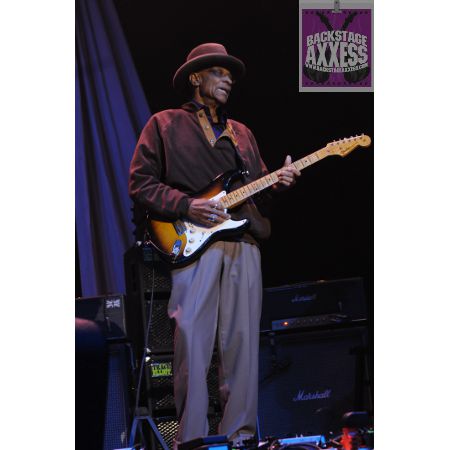 Hubert Sumlin, who made his name as the slash-and-burn guitarist for Chicago blues great Howlin’ Wolf before embarking on an illustrious solo career, died Sunday in a hospital in Wayne, N.J., reportedly of heart failure. The Chicago bluesman had turned 80 years old on Nov. 16. A week later, Rolling Stone magazine unveiled a list citing him as one of the 100 greatest guitarists of all time.
Mr. Sumlin had been scheduled to appear at this year’s Chicago Blues Festival with David “Honeyboy” Edwards in a tribute to Robert Johnson. They both canceled their appearences due to health issues. Edwards died at age 95 on Aug. 29. Mr. Sumlin had a lung removed in 2004 and last year appeared at Eric Clapton’s Crossroads Guitar Festival with his oxygen tank. He played with Wolf from 1953 until Wolf’s death in 1976.
On the Rolling Stone roll call, Mr. Sumlin ranked No. 43. Jimmy Page told the magazine, “I love Hubert Sumlin. He always played the right thing at the right time.”

By Dave Hoekstra of the Chicago Sun Times