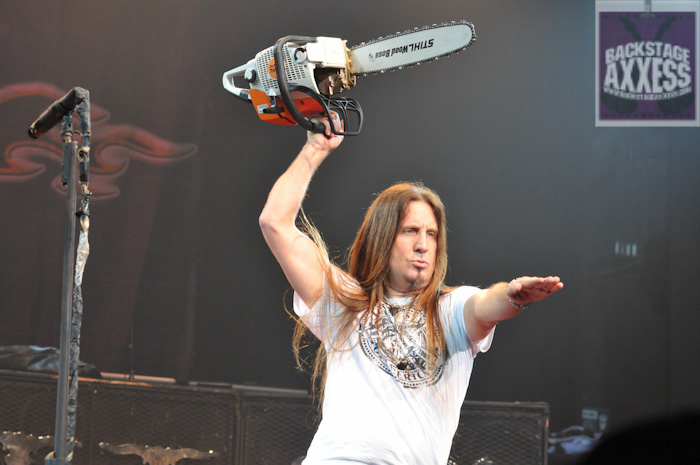 ­     Dean Guitars held their third annual NAMM Jam at the Grove of Anaheim, CA and it was certainly the coolest party in town. The bill featured a very interesting cross mix of talent. For those that weren’t lucky enough to obtain a pass for this exclusive event, it was broadcasted to the world via a real time HD Webcast.

­     Guitarist Vinnie Moore got things started at 7pm with a mostly instrumental 40-minute set. Along for the ride were musicians John “J.D.” DeServio (Black Label Society) on bass, Richie Monica (Tantric) on drums and keyboardist Mike DiMeo (Riot). A cover of Jimi Hendrix’s “Fire” featured J.D. on lead vocals followed by UFO’s “Too Hot to Handle” that had Mike singing. It was easy to see why Moore is one of the most influential guitarists, he is a great player.

­     Static-X front man Wayne Static was up next. After announcing he was an alcoholic, shots were ordered and out came 3 shooter girls, one being his wife Tera Wray. They appeared throughout the show, Tera even went topless during the third song. For 45-minutes we were treated to some evil disco which were all Static-X songs except “Assassins of Youth” and “Static Killer” off his recently released debut solo album “Pighammer.” The last song “Cannibal” featured Mrs. Static feasting on a severed arm.

­     Jose Mangin from Sirius XM and Headbangers Ball came out next to get the crowd pumped for the half time show. The Dean Girls & Coffin Case Fashion Show lasted 15-minutes and featured ladies modeling outfits created by Toxic Vision.

­     Jackyl hit the stage at 9:50 and rocked the house for 55-minutes. The drinking started early as the singer had a bottle of his signature Jesse James Bourbon Whiskey on stage. Guitarist Jeff Worley playfully rocked his amp stack back and forth throughout the show. “I would like to thank Dean Guitars for bringing us in to represent the turd in the punch bowl,” Jesse joked. Out came the cordless whip mic for “Dirty Little Mind.” “The Lumberjack” song was last, featuring a chainsaw solo and the sawing of a wooden bar stool on stage.

­     Headliners Testament brought thrash to the bill and as a result a mosh pit on the floor went solid for their one-hour performance. The band features a line-up of Chuck Billy on vocals, Alex Skolnick and Eric Peterson on guitars and bassist Greg Christian. Gene Hoglan is filling in on drums as Paul Bostaph departed from the band just a month ago. The band has a new album “The Dark Roots Of Earth,” coming out this spring, but they stuck to all older material. All the great songs from the first few albums were included in the set. Billy didn’t waste time talking and the band proved why they are still relevant in thrash 29 years later. For the last song Billy challenged moderator Jose to get the pit going and apologized for giving him his first hash joint when he was 17.

The Preacher
The New Order
The Persecuted Won’t Forget
Practice What You Preach
Over The Wall
Souls of Black
Into The Pit
More Than Meets The Eye
D.N.R. (Do Not Resuscitate)
3 Days In Darkness
Disciples of the Watch 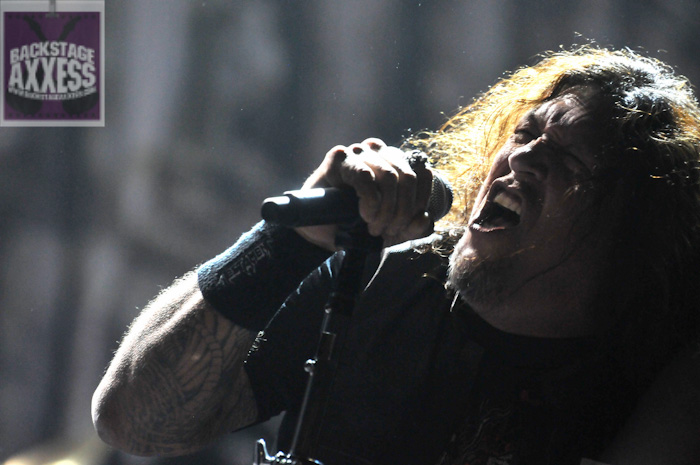 We would like to thank Curse Mackey from Dean Guitars for allowing BackstageAxxess.com to review the show.