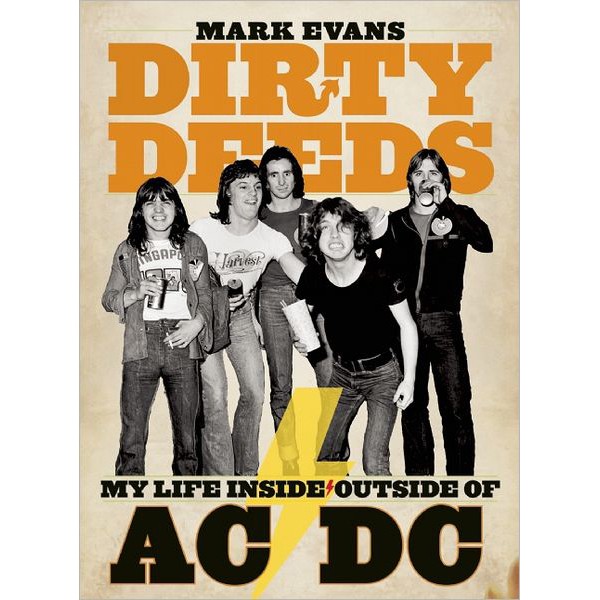 Although Mark Evans cannot lay claim to be the most famous former member of Australia’s AC/DC, he certainly can lay claim to being with the band when it was in one of its most important phases. Evans tenure in the band was just a couple of years and it coincided with his own formative years, ages 19 to 21.

As far as rock biographies go, “Dirty Deeds: My Life Inside/Outside AC/DC” one of the most genuine I have ever read. While the centerpiece of the story is when Evans was in the band, there is far more to the story than a kid from Australia partying with Angus and Malcolm Young.

Evans begins the tale painting a picture his youth, fighting poverty and his struggles in school. What strikes the reader is Evans deep sense of the importance of family and loyalty, a theme that permeates the book.

By the time we meet the classic AC/DC lineup of Bon Scott, Angus Young, Malcolm Young and Phil Rudd, they were already a microcosm of the corporate machine that they would evolve into by the end of the 1970s. Evans provides a unique peek into the workings of the music industry during the era, including the inner politics of the band, dealing with a major label and being an opening band for the major acts of the era including Black Sabbath, Kiss and Rainbow.

What makes the book work is that Evans looks inward instead of wring a steamy tale filled with gossip about his former mates. He analyzes why he was asked to leave the band and provides clues to the reader instead of presenting it in absolute terms.

There is much more to the story than his tenure in AC/DC, highlighting personal triumphs and tragedies after he left the band. In many ways what makes the story interesting is the fact that he didn’t become a megastar, and yet it appears he managed to make a living in the music industry.

I would highly recommend this book of you are a fan of the rock biography genre. It is well written and thought provoking and a great read.