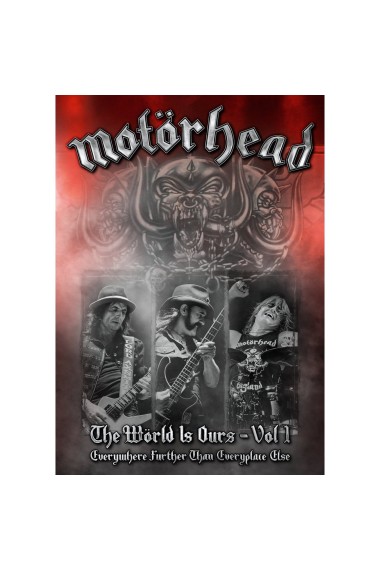 After twenty albums and over thirty-five years of touring the world, nobody in rock and roll does it quite like Motorhead. Their new Blu-ray release “The World Is Ours-Vol. 1” shows you why. The disc contains a complete concert recorded at their April 2011 show in Santiago, Chile.

The opening scene of fans lined up in front of the theater and police in riot gear sets the stage for the intensity of the night. Amid chants of “Lemmy!, Lemmy! ,” the band takes the stage. The insanity begins with their introduction of “We are Motorhead and We Play Rock and Roll!” The Chilean crowd was completely pumped up as Motorhead tore through new songs “Get Back In Line” and “I Know How to Die” as well as classics like “Ace of Spades” and “Overkill.”

Shot completely in black and white, the footage captures the raw emotion of the crowd as they camera pans back and forth from the stage to the audience. It also allows the viewer to focus on the musical talents of frontman Lemmy Kilmister, guitarist Philip Campbell, and drummer Mikkey Dee without distractions.

The disc also includes a few selections from a 2011 stop in New York and a 2010 show in Manchester, UK. Included from the UK concert is “Born to Raise Hell” featuring Michael Monroe on vocals. Bonus features include backstage interviews with Motorhead that provide a glimpse into what the band experiences at a show and their personal insights on their new album.

A great concert video should be able to capture the moment and transport you to that particular place and time. “The World Is Ours-Vol. 1” does just that, making you want to jump up and down right along with the Santiago audience. I will be anxiously awaiting a Vol. 2.