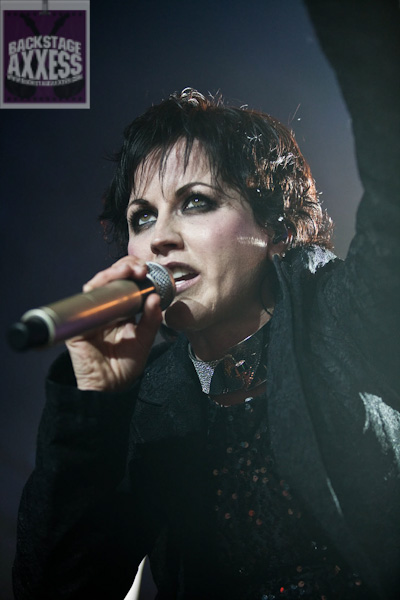 ­     Back in 2009, The Cranberries reunited after a six-year hiatus. The Irish rockers returned to Toronto to perform in front of a sold out crowd at Canada’s Sound Academy. Singer Dolores O’Riordan was joined by her original band mates Noel Hogan on guitar, Michael Hogan on bass and drummer Fergal Lawler. A female back up vocalist and a keyboardist/guitarist were also featured on stage.

­     They opened with arguably two of the bands best songs, “Dreams” and “Linger” off of 1993’s ‘Everybody Else Is Doing It, So Why Can’t We?’ It was a risky move, I would think, so early on. “Tomorrow,” the first single off the new album ‘Roses’ was up next, a song about living in the moment and trying to be positive despite all the challenges that life might present you. “Roses” was actually recorded in Toronto at Metalworks Studios back in 2011 with returning producer Stephen Street. It marks their first studio album in over 10 years.

­     Tonight, the 90-minute set focused primarily on their tunes from the 90s with just five songs from the last decade. The jet black haired Dolores, all in black, looks and sounds better than ever and the new music fits in quite nicely. A fan threw up a hat during “Just My Imagination” for which the singer playfully put on for a bit. The next song “Ode To My Family” got a roaring response from the crowd as it started. Dolores mentioned she had a lot of friends attending, including some teachers that were from her children’s school looking onwards from a private balcony.

­     I have never seen a singer before that spent so little time in the middle of the stage. Having her own unique moves and lots of energy, O’Riordan usually went to the sides of the stage and performed there. During “When You’re Gone” she actually spent some time sitting down to sing for the fans right up front. “I Can’t Be With You” was the first of three songs Dolores played guitar during. She also left the stage early during this song as the band went to town and brought it to a close. The hit “Zombie” had the crowd singing along loudly and featured some intense strobe lighting as it brought the main set to a finish.

­     Returning for an encore, Dolores did a wardrobe change and was now wearing a black dress with black feathers on top. Two newer songs “Conduct” and “Losing My Mind” were featured and seemed like an odd choice as they slowed things down. However, the band did pick things up as they concluded the night with the great “Salvation.”

All Photos by Karl Anderson

We would like to thank Candace Valin from Livenation Canada for assisting BackstageAxxess.com in reviewing the show.