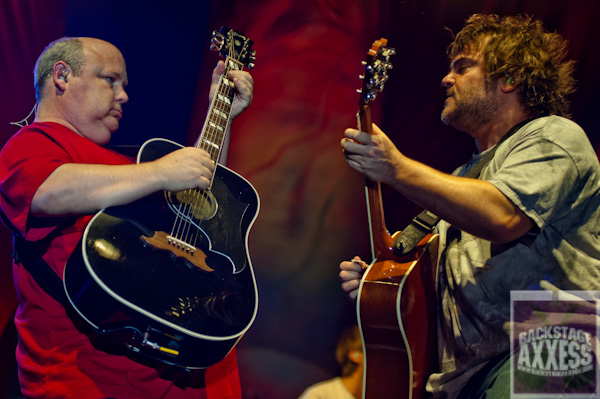 ­     ­This was the hardest show in town to get to, due to a road closure out front of the venue where the Honda Indy racetrack was situated. This however did not stop a few thousand fans from making it out. Echo Beach, Toronto’s hottest new outdoor concert venue, was host to the Tenacious D concert. Fans up front were bouncing around nipple balloons in anticipation of the headliners. At 9:10pm Jack Black & Kyle Gass emerged on stage all monk like in hooded robes, which were then removed by a female crew member. The rest of the band just walked out normally.

­­     During the first song “Rize of the Fenix” (which pokes fun at the band’s unsuccessful 2006 feature film) a massive inflatable Phoenix/Penis erected behind the drum kit. Earlier at sound check Kyle was worried because everyone was going to be standing on sand. “We appreciate your sacrifice, you will stand on sand for the D and for that, we shall rock you a little harder than the rest of the tour!” Jack proclaimed to the crowd. (On a side note, they did offer a shoe check in service). During “Deth Starr” Jack shot a big evil alien squid on stage and just before “Roadie,” a roadie was put to the test toweling off, massaging and getting water for the singer. “Rize of the Fenix” was just released in May and is the band’s third studio album in eleven years. The first six songs performed were attributed to it and the rest of the 105-minute set focused on older material. A toy saxophone was brought out to Black, which was a hilarious moment as he soloed with it before “Kielbasa.”

­­     A mocked up fight had Kyle quitting the band and leaving the stage temporarily but returned during “Dude (I Totally Miss You).” In addition to the singing and acoustic guitar playing of Jack and Kyle was John Konesky on electric guitar, John Spiker on bass and Brooks Wackerman on drums. The backing band plays as tight as your going to get and is really impressive overall. During “Beelzeboss (The Final Showdown)” playing the part of being possessed by Satan was Konesky who also sang in parts of the song. The Who’s rock opera ‘Tommy’ was featured in a medley which included a great rocking cover of “Pinball Wizard.” An extended version of “Double Team” allowed for band introductions and had each member performing a short solo. Jack sang a portion of Van Halen’s “Panama” at the beginning of the song and “Movin’ On Up” (The Jeffersons Theme) during his solo.

­     The main set came to a close with the Phoenix spewing white smoke and confetti sperm. Returning from the encore break was just Jack and Kyle as they entered the stage through the inflatable creatures lower region. Three songs were performed acoustically, “Baby,” the original Star Trek theme, complete with lyrics, before concluding with “Fuck Her Gently.” The guys then exited via the same way. There was lots of humor, swearing and funny banter in addition to a great rock show. It was definitely entertaining and as they put it, they rocked us harder than Pantera.

We would like to thank Candace Valin from Livenation Canada for assisting BackstageAxxess.com to review the show.