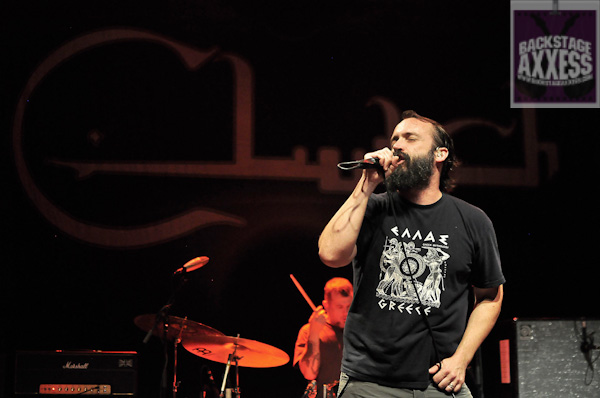 ­     Forgive me for being a slow learner. Clutch was never on my radar in the early days of the band. I honestly cannot say why, and I feel like I cheated myself out of years of good, honest, bare bones musical badassery.

­     Let me give you some background. It was 2009 and I had heard all the tales of how great Clutch was, so I figured I’d finally go and find out what it was all about. Unfortunately, I must have caught them on a bad night. I could tell that the songs would be great if they were being played by a band that really meant what they were doing at the moment, but Clutch just wasn’t doing it for me. Fortunately, this was not the case on the night of August 10th, 2012. Clutch showed up and ripped through the crowd like a grizzly bear swinging a beer keg. I remembered a handful of songs from the mild February night back in 2009, but it looked and felt like a completely different band performing this time around. If there was ever a picture placed next to the dictionary definition of “blue collar rock & roll,” you’d see a shout of these guys. I understand the need for certain groups to go all out with the pyro, lasers and over-the-top stage shows. I also respect a band’s ability to go on stage wearing the same clothes they wore to the grocery store, put on a show under simple stage light and put on a show that is burned into your memory. Clutch has a loyal, almost cult following, and now I know why. The crowd of the Town Ballroom was moving like we were an extension of the band itself.

­     “Burning Beard” was the first evidence that things were going to get more intense than the first three songs, which were incredible in the first place. Within the first 2 seconds of “Mob Goes Wild,” everyone in the building was given firm confirmation that we were all there to give it back to Clutch as hard as they gave it to us. The rest of the night was nothing short of an amazing display of why music is so important.

­     It may have taken me a while to awake to the true genius of this band, but I guess it’s true what they say, “better late than never.” I’ve been you tubing the set list since the morning after the show and am truly confused as to why I don’t own their entire catalog. One thing is for sure, the remainder of my itunes account will be put to a zero balance by the time you read this.

We would like to thank Jon Freeman of Freeman Productions for allowing BackstageAxxess.com to review the show.