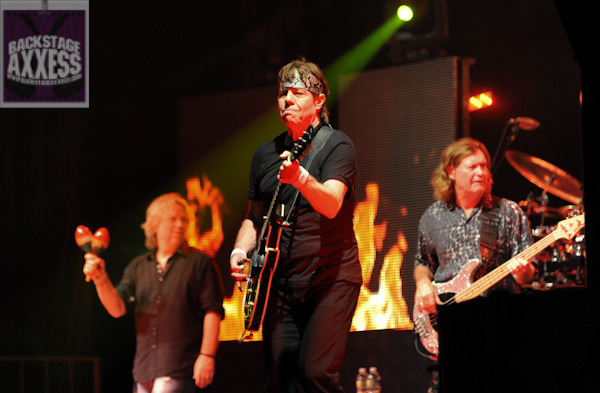 ­     Longtime blues rock guitarist and vocalist George Thorogood played to the biggest crowd of the year so far in Lockoprt, NY, for the weekly LaBatt Canal Concert Series. Thorogood’s show came with a bigger production than what is usually seen there. Complete with a backdrop, LED screens and a variety of lights, Thorogood and his band were ready to rock and they delivered their best on 13 songs.

­     Thorogood is a little unorthodox in his guitar playing as he uses his thumb pick to pluck the strings. If you are wondering why there is such a fluent backbeat to Thorogood’s songs, well wonder no further. Bassist Billy Blough and drummer Jeff Simon have been holding down that part since the late ’70s. Jim Suhler complemented Thorogood on rhythm guitar while Buddy Leach gave the crowd an impressive display on the saxophone throughout the performance.

­     The LED screens gave appropriate visuals during the songs that were played. During the ultimate drinking song, “One Bourbon, One Scotch, One Beer,” photos of beer appeared. The classic video for “Bad to the Bone” (with the late Bo Didley) accompanied what is George’s signature song.

­     Opening act Tom Hambridge, who will be producing George’s new album, joined Thorogood on his second tune “Move it on Over,” with a set of maracas. During “Tail Dragger,” Thorogood didn’t have his trusty guitar as he went with his mic only. After the entire set, Thorogood showed his patriotic side by coming out while the “Star Spangled Banner” played on the screen. He sang along and gave thanks to the crowd for attending.

­     This was Thorogood’s first performance in Lockport since its inception in 2008. He loved playing there and said he hopes it’s the start of a wonderful relationship! Let’s hope so George!

Rock Party
Who Do You Love ? (Bo Didley cover)
The Fixer
Night Time (The Strangelovers cover)
I Drink Alone
One Bourbon, One Scotch, One Beer (John lee Hooker cover)
Cocaine Blues (Johnny Cash cover)
Get a Haircut
Bad to the Bone
Move it on Over (Hank Williams cover)

We would like to thank Jenna Donahue from Mike Donahue Mgmt. for the photo pass and LaBatt Concert Series Organizer Kathy Paradowksi for credentials to cover the 2012 season.