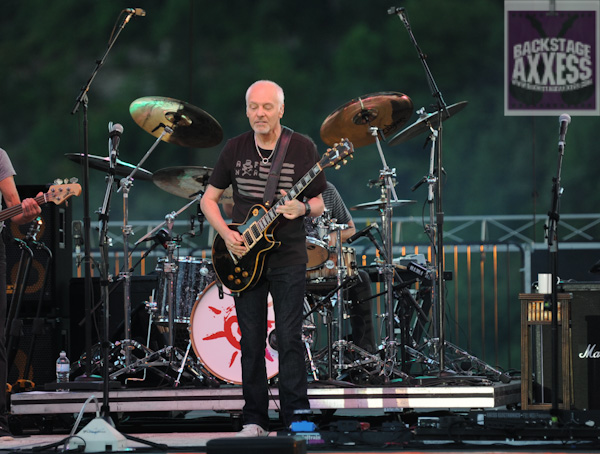 ­     Peter Frampton is becoming a fixture at Artpark as this is the third (3rd) time his band has graced its stage in the last four (4) years. Last week on the 101 freeway in Los Angeles, Frampton was rear ended, getting a minor case of whiplash as a result. But he showed no ill effects from it as he and his band cruised through a 14 song set. This was a little different from last year’s 35 year anniversary tour, dubbed “Frampton Comes Alive 35,” as Frampton concentrated on playing the double live album in its entirety for that performance.

­     Before “Lines on my Face,” Frampton addressed the fans to tell them how much the band loves playing here (one of only six dates booked for this summer). He also called the crowd “my family of friends.” Someone shouted “I love you, man,” and Frampton replied, “I love you too, but in a manly kind of way.” That seemed to garner lots of laughs from the audience. He also referred to the warm crowd, calling it a “love fest” as he subsequently went into the song.

­     “Show me the Way” seems to always get the biggest reaction and this past Tuesday was no different. Frampton slowed down one of the choruses to “mix it up a bit.” He played an acoustic guitar on another one of his huge hits “Baby, I Love Your Way.” Frampton came with the same band he has had the last couple of shows here, with the exception of Stanley Sheldon, who was on bass, replacing the departed John Regan.

­     It doesn’t matter how many times Frampton and his band continue to tour the Western New York area as the number of concert goers continues to show strong support for the 70s rock guitar icon.

Something’s Happening
Doobie Wah
Lines on my Face
Show Me the Way
Plain Shame
Signed, Sealed, Delivered, I’m Yours (Stevie Wonder cover)
Baby, I Love Your Way
Go to the Sun
(I’ll Give You) Money
Black Hole Sun (Soundgarden cover)
4 Day Creep (Humble Pie cover)
Off the Hook
Do You Feel Like I Do?

We would like to thank Cami Opere from Sacks Company for the photo pass and Maria Costello for the tickets so BackstageAxxess could review the show.