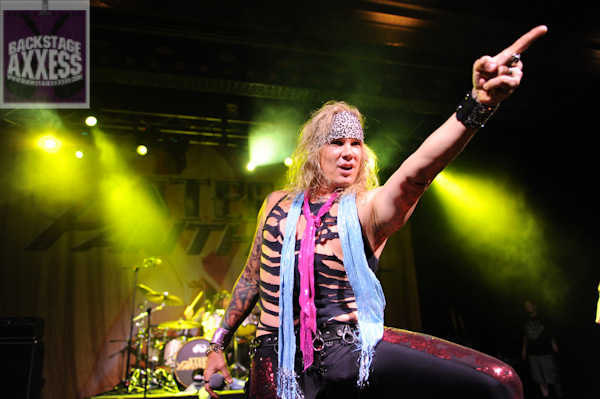 ­     Witnessing a Steel Panther concert can be many things. What is still considered a joke to most, can be considered serious to some. Both can be considered when attending a Steel Panther show. A band that went through a few name changes (Metal Shop and Metal Skool) and built a reputation on the Sunset Strip in California, is starting to carve a niche around the world. Yes, WORLD! Steel Panther is finding out that if you combine raunchy humor with amazing musicianship, it’s recipe for success! The band is coming off of the release of its second album called “Balls Out.”

­     Dressed like a band coming right out of the glam metal movement, Michael Starr (vocals), Stix Zadinia (drums), Satchel (guitar) and Lexxi Foxx (bass) are amazing players. Satchel also had a stint with Rob Halford’s solo band “Fight.” During his guitar solo, he also played the bass drum, making for a very entertaining solo. Michael Starr fronted the top Van Halen tribute band around called Atomic Punks. He commands the stage like any of the top vocalists do today. Along with his stage presence, he has tremendous vocal range and showcased that range during “Death to all but Metal.”

­     Bassist Lexxi Foxx plays the part of the “good looking” but “not so smart guy” whose interactions with the others plays off very well. The band is backed by the steady playing of Stix Zadinia.

­     It’s important to have an open mind when seeing these guys perform, as their raunchiness can be offensive to some but their musicianship is, and what should be, put to the forefront!

We would like to thank Kevin Chiaramonte from PFA Media for allowing BackstageAxxess.com to review the show.