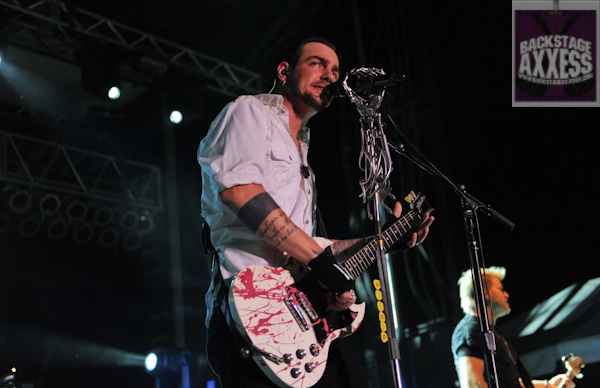 ­     The Carnival of Madness Tour, a.k.a. “The Return to Edgestfest,” as it is better known if you live in the Western New York area, came complete with Star Wars related characters, and the local radio station, 103.3 The Edge was able to move this festival back to the Outer Harbor in Buffalo, NY where it was last held on August 1, 2005 with Billy Idol headlining. With the magnitude of the show and bands involved, I didn’t know if much thought was given to the amount of traffic that would be coming in for the event. It resulted in major traffic back-up along the main in roads to the venue, which caused a lot of people to miss a good portion of the earlier part of the show.

­     The first band I was able to catch on the day was Black Stone Cherry. Their southern rock mixed with a heavy dose of alternative rock makes them stand out from most bands. Rhythm guitarist Ben Wells was a crazy man possessed during their short set. He was all over the stage and gave his all as did the rest of the band throughout the performance.

­     The next band, and one that we have talked about plenty on this site just within the last year alone, was Halestorm. Fresh off their new release, “The Strange Case of….” and their own headlining tour, the band unfortunately played a small set consisting of only 7 songs. I think rhythm guitarist and vocalist Lzzy Hale and the guys sure did make a lasting impression in the short time they had, as everyone was raving about them, especially those who have never seen them live. That is what every band hopes for. Plus, Evanescence vocalist Amy Lee came out to sing co-lead on “Break In” with Lzzy Hale on piano; the highlight of the set and entire’s day worth of music for sure!

­     Chevelle took the stage next with a giant bull mounted on the stage to represent their latest record “Hats off to the Bull.” The 10 song set focused on 4 songs off of the new CD and closed with the lively “Face to the Floor.” They really energized the show, and were cited as everybody’s favorite when talking to a good portion of those in attendance.

­     The band I was looking forward to the most was Evanescence. With former guitarist Troy McLawhorn back in the fold, the band hopefully will show steadiness after a period of many lineup changes. The very talented Amy Lee was all over the place. She played keyboards on a few tracks and piano on “Your Star” and “My Immortal.” There are few who are more talented in the business than Lee as she delivered powerful vocals on “My Heart is Broken” and “Whisper.” The band perfectly fit in around her so she could showcase her talents and she did just that!

­     The adopted hometown band Three Days Grace (as vocalist Adam Gontier remarked upon taking the stage), were the headliners for this show, and are getting ready to release their 4th studio effort, “Transit of Venus,” on October 2, 12012. The band is enjoying a short stint of shows before it goes on a major tour to support the album. The Toronto based band enjoyed every minute of being a headliner as they went through all of their hits in addition to a new song, “Chalk Outline,” that sounds just like you’d expect a Three Days Grace song to sound. It looks like the new CD might be something special, given this early indication. The band enjoyed playing well over an hour for the crowd in Buffalo.

­     With many hands in the cookie jar, it seems localizing the Carnival of Madness into “Edgesfest,” or whatever it might be labeled in your town, is a bad idea. Too many hands in one cookie jar led to credential issues for media and traffic headaches for most coming in. This should be kept under one moniker and be billed and ran through one source.

Never Too Late
Animal I Have Become

Love Bites
Mz. Hyde
Freak
Break In
Misery
I Get Off
Here’s to Us 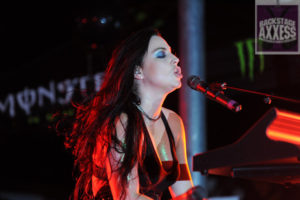 We would like to thank Bari Lieberman from MSOPR for allowing BackstageAxxess to review the show.