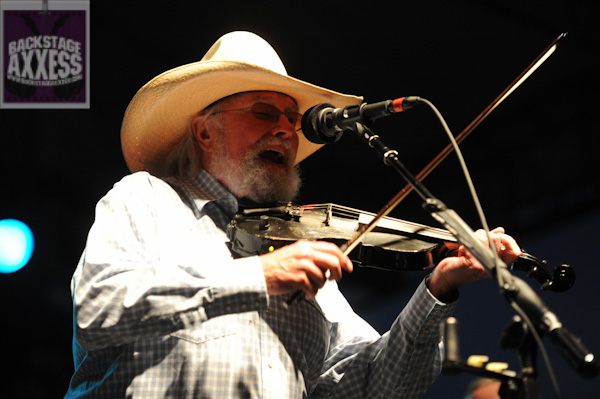 ­     One of the mainstays in country music closed this year’s Tuesday in the Park concert series at Artpark for 2012. Charlie Daniels and his brand of southern rock, mixed in with country, fought off a steady rain and the surprisingly hearty crowd enjoyed a good dosing of Mr. Daniels music.

­     The 75-year-old Daniels brought back the same band he has been touring with for the last handful of years, minus longtime organist Taz DiGregorio, who lost his life tragically in an automobile accident last October. Newly recruited Shannon Wickline held his own and fit right in with the band as they went through a 14 song set.

­     It never gets old listening to Daniels explain what a redneck is. His understanding of it goes “a redneck isn’t someone who shoots signs in their pickup truck while tossing beer cans out the window. That’s an idiot! A redneck is a hard working man who works from sun up to sundown, getting the back of their neck a little rosy in the process.” After his explanation the band went into “(What This World Needs is) A Few More Rednecks.”

­     Daniels thanked present and past troops and their service to our country stating that “They are the best we got!” He dedicated a new song to them called “Let ‘Em Win or Bring ‘Em Home; ” no better way than to express his feelings of patriotism and Daniels did a fine job with the new song. The band enjoyed an extended jam on “Saddle Tramp” and the instrumental “Black Ice.” Guitarist Bruce Brown took vocals on “Even up the Score.” Others in the band also enjoyed the limelight as drummer Pat McDonald performed a long drum solo and guitarist Chris Wormer enjoyed leading the way on “William Tell Overture.”

­     It’s always good to see legends and that is what I personally did this past Tuesday at Artpark. Mr. Daniels voice hasn’t changed a bit and if one should ever doubt that, see him belt out “How Great Thou Art” and your opinion would change immediately! The man still has it and the few thousand who braved the weather would seem to agree I would say!

We would like to thank Maria Costello from Artpark for her assistance in helping BackstageAxxess review the show and for her help during the 2012 season!