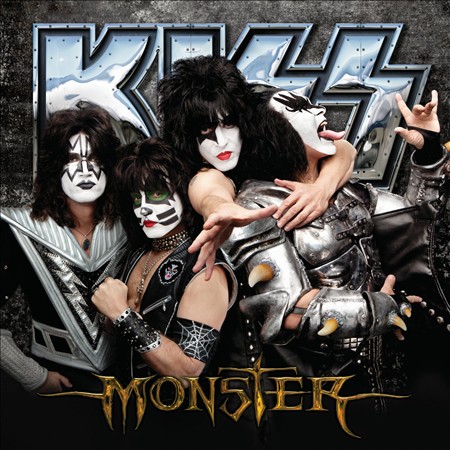 Kiss’ career has spanned almost 39 years and this year they are about to release their 20th studio album titled “Monster” on Universal Music Enterprises. As with their last effort “Sonic Boom,” the band invited no co-writers and founder and rhythm guitarist Paul Stanley co-produced the CD along with Greg Collins. Stanley, along with co-founder and bassist Gene Simmons have continued to sport the same lineup for the last 8 years with drummer Eric Singer and lead guitarist Tommy Thayer rounding out the quartet.

The band’s first single “Hell or Hallelujah” was released to the airwaves on July 2, 2012. It is an up-tempo, ass kicking song that showcases Thayer’s strong and consistent licks delivered with that traditional Stanley vocal that Kiss fans have come to love. I believe it can already be put in the category of a “Kiss classic!”

Simmons has cited his favorite track on this release as the 2nd track, “Wall of Sound.” For some reason, the song takes me back to an 80’s or earlier version of Kiss, perhaps something that could have been on either “Crazy Nights” or Hot in the Shade.” It’s a cool track but not my favorite Simmons song on the CD as you will see below.

Stanley handles lead vocals on the tune “Freak” and shares in the collective effort on the choruses and some of the verses. “Back to the Stone Age” was co-written by all four members and all 4 have their imprint on this song vocally. All show an amazing ability to harmonize their vocals.

One of my favorite tracks is “Long Way Down.” This is a flowing track that bares everything that Kiss encompasses; a strong Stanley vocal performance and good harmonies. This, coupled with Simmons, Singer and Thayer, who all shine on this track, again make for another “Kiss classic.”

“Eat Your Heart Out” starts out with the group doing an a Capella chorus, during which, you can really hear Singer who has an underrated voice. Simmons takes lead vocal on this track, and if any song stands out as unique, I would say it’s this one.

Thayer commands lead vocals on “Outta This World.” I like this song more than his last lead on “Sonic Boom” called “When Lightning Strikes.” This seems more natural than its predecessor, and I hope they will have a chance to perform this in concert.

Singer also has a song called “All for the Love of Rock & Roll.” As noted, his vocals are underrated and he shows what he can do with his voice on this song. His style of playing is a little different here, which earns some added attention.

Simmons’ bass pummels through the track “Take Me Down Below.” He locks in with Singer and leads this track on its way to being another one of my favorites on the album. I personally would like to see this released as a single. Simmons and Stanley both share vocal duties on the song.

“Last Chance” is another stand out selection. It may not get any recognition beyond my review, but it has a great hook and a memorable chorus.

Overall, I believe it’s a stronger performance than “Sonic Boom.” Even though this band has been together for 8 years now, this is only the 2nd studio effort between them. I think you can tell the band is becoming more comfortable with one another and the results show. This solid release by Kiss should delight the Kiss Army!