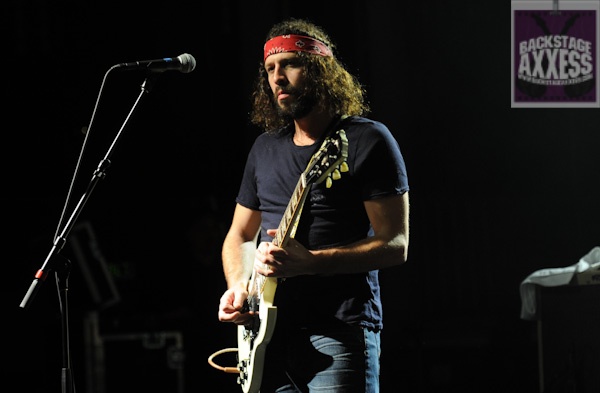 ­     When watching The Sheepdogs, one can’t help but to go back to the movie “Almost Famous” and reminisce about the fictional band Stillwater. While physical characteristics may be similar, their is nothing else that can be drawn between the two. The band, born out of Saskatoon, Saskatchewan, is just finding their niche and started off their first headlining tour of the USA in Niagara Falls, NY, this past Sunday night.

­     Led by Ewan Currie on vocals and guitar, the band also consists of Leot Hanson on guitar, Ryan Gullen on bass and Sam Corbett on drums. The band has also enlisted a keyboard player as their latest album (produced by Partrick Carney of the Black Keys) is heavy on vintage organ and piano. On this tour, Ewan Currie’s younger brother Shamus is accompanying the band on keyboards and trombone. With the flavor of The Black Keys, this band can also be compared to bands like The Eagles or Crosby, Stills, & Nash for their rich harmonic style songs and Gregg Allman for the soulfulness in the way they deliver them.

­     The hour-and-a-half long performance consisted of a tightly constructed 20 song set. The band got a good response the entire night. Currie showed his talents on “Ewan’s Blues” as he stepped out from center stage to take his spot behind the keys/organ and the keyboard player, his little brother Shamus, went to the front to add some trombone to the song. Before Currie brought out the acoustic guitar on “Alright Ok,” he asked the question “How about those Buffalo Bills?” and received a hearty response from the crowd. Other highlights were “The Way It Is”, “I Don’t Get By” and “Learn & Burn.”

­     The band may give off the vibe and appeal of a jam band, but they are anything but that. It was refreshing to see a different and unique style of music and The Sheepdogs delivered it quite nicely!

How Late, How Long
I Need Help
Southern Dreaming
Right On
Dream Worth Dying For?
Laid Back
Sharp Sounds
Who?
Alright Ok
Ewan’s Blues
The Way It Is
Feeling Good
One You Belong To
I Don’t Get By
Javelina
Learn & Burn
Catfish 2
I Don’t Know

Soldier Boy
Let it All Show

We would like to thank Chelsey Northern from Atlantic Records for allowing BackstageAxxess to review the show. Please stay tuned for an interview with Ewan Currie conducted before the show.