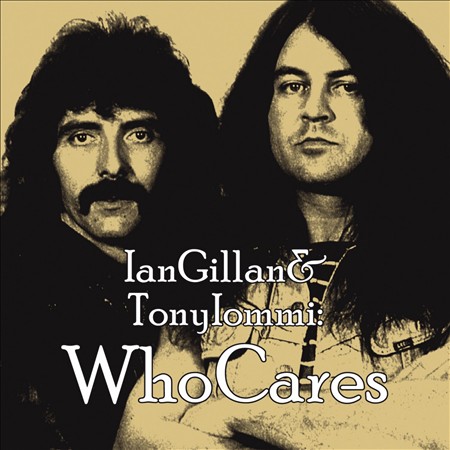 In 2011, two rock legends, vocalist Ian Gillan and axeman Tony Iommi, were inspired to help rebuild a music school in Armenia and released two charity singles. Joining them for this effort in the supergroup WhoCares were Jason Newsted of Metallica, Nicko McBrain of Iron Maiden, Linde Lindstrom of HIM and the late Deep Purple keyboardist, Jon Lord. Those two singles are included on a new 2 disc set released by Gillan and Iommi along with some classics and rare releases from both of their careers.

“Out Of My Mind” and “Holy Water” are the WhoCares charity tracks and alone are worth the price of the collection. Combining the classic Deep Purple sound with Iommi’s signature riffs, the songs can only be described as epic. The gems don’t stop there. “Zero The Hero” from Ian’s stint with Black Sabbath is included as well as a cover of Marvin Gaye’s “Can I Get A Witness” from Ian’s first band, The Javelins. Released for the first time on CD is “Slip Away” with Iommi and Glenn Hughes recorded during the “Fused” session. Another rare treat is a Deep Purple studio jam “Dick Pimple” which was originally recorded for a fan club only release. To top things off, they have included “Smoke On The Water” from Deep Purple’s “Live At The Royal Albert Hall” which features Ian Gillan sharing vocal duties with none other than Ronnie James Dio.

This rare collection is a piece of rock and roll history and a must own for fans. The added bonus is that it’s also for a very good cause. Go out and pick this one up today.