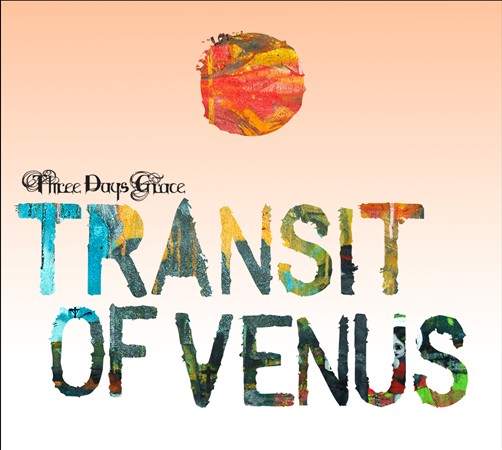 Canadian rockers Three Days Grace have just released their highly anticipated fourth album, “Transit of Venus.” The new record shows us a more mature Three Days Grace as they venture out of their comfort zone and experiment with some new sounds. The core sound of the band is still there, led by Barry Stock on lead guitar, Brad Walst on bass, and Neil Sanderson on drums. However, “Transit” is a production heavy album with the addition of keyboards and lots of layering of sounds. Lead vocalist Adam Gontier is in top form and has pushed his vocals to new extremes for this record.

Things start out a bit differently with the celestial quality of “Sign of the Times” but quickly turn heavier. The first single “Chalk Outline” is next and incorporates a bit of electronica but is still riff heavy with a crushing chorus. Lyrically, the songs are a departure from the positivity of “Life Starts Now” and are a flashback to the pain of their first two albums. Three Days Grace tackles bad relationships in “The High Road” and the problem of addiction in “Happiness.” For me, the jewel of the record is the ballad “Time That Remains” which features beautiful acoustic guitars and haunting vocals. Also included is a terrific cover of Michael Jackson’s “Give In To Me.”

Experiments can be dangerous if they fail, but in this case Three Days Grace pulls it off. There is enough of their classic sound to satisfy fans and just enough change to keep things interesting. Astronomically speaking, a transit of venus only happens once every 240 years or so. Let’s hope it doesn’t take Three Days Grace anywhere near that time to treat us to some more new music.