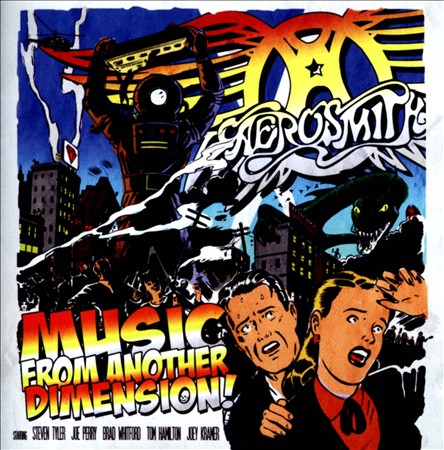 The Bad Boys from Boston are back with their fifteenth studio album, “Music From Another Dimension,” their first release of all new material in over eleven years. With over 150 million records sold and a spot in the Rock and Roll Hall of Fame, Aerosmith has had their fair share of accolades. The latest being the designation of their old Boston apartment as an historic landmark. Since they have literally returned to their roots as part of the celebration, here’s hoping they did musically as well.

Of course there are a few ballads on the record, including one of the first singles, “What Could Have Been Love” which features a bit of a twangy, country guitar and has all the makings of being an absolute monster hit. Tyler’s vocals sound terrific on the slower “We All Fall Down” and even when he seems to screech a bit on “Another Last Goodbye” it seems fitting somehow, a Tyleresque moment if you will. “Can’t Stop Lovin’ You” features a duet with country star Carrie Underwood and will garner both a lot of crossover attention. Joe Perry takes the vocal lead on the jamming “Freedom Fighter” which also has Johnny Depp making an appearance on backing vocals.

If you are a fan of seventies era Aerosmith and their bluesy rock beginnings, then I have saved the best for last. “Street Jesus” is an almost seven minute jam which is a “Same Old Song and Dance” meets “Train Kept A-Rollin'” and sounds as if it could have been straight off of the “Rocks” or “Toys in the Attic” album. With Steven’s sleazy vocals and contagious bluesy guitar riffs, it is quintessential Aerosmith and simply kick ass rock and roll.

Although “Music From Another Dimension” opens and closes with a computerized Twilight zone type voice, the record is better described as music from two dimensions. It combines the best of their later years with powerful nineties era ballads and has some killer rock and blues tracks that offer us a throwback to their earlier career, making it a must own album for Aerosmith fans of all generations. I hope this Aerosmith train keeps a-rollin’ for many years to come.