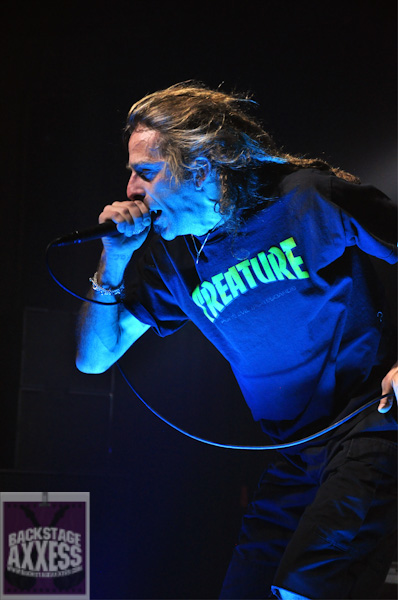 Life is comprised of a series of events. Some of which remain dear to our hearts because they were “first times.” First date, first love, first car, and of course, first Lamb of God show. I could assault everyone who reads this with metaphor after boring metaphor, but the truth is that you just won’t get the experience if you have it merely explained. You have to participate in the event first hand. Opening the show was Sylosis. A band from across the pond in England.

It’s almost unfair to have a slot on a bill that features three other bands with worldwide recognition. Adding to it, most of the crowd is familiar with the catalog of those three bands, each of which with the full capability of headlining a show in a venue the size of the Rapids Theater. That being said, Sylosis did a great job given the task at hand. Upon first glance, I noticed how their music sounded so brutal, but they weren’t moving around too much. It became very clear as soon as I got closer to the stage and realized that they had no room to move in the first place! Good job guys! Maybe I can bang off some frames next time they roll through.

A true supergroup was up next. Hellyeah delivers the same degree of ass kicking southern fried metal every damn time I see them. These guys write infectious tunes and turn every show into a party. But then again, when you combine pieces of Pantera and Mudvayne, what would you expect? These guys are trained professionals in the art of ass kicking live shows. Each song seems to serve as an anthem to beer drinkin’, whiskey shootin’ & hell raisin’. There’s probably some card playin’, drunken vandalizin’, shootin’ your mouth off to the police & being stuffed into the back of a cruiser in there too, but I guess you’ll just have to find that out for yourself. Good luck! Just make sure you don’t turn your bail money into beer money. End all, be all, Hellyeah is a guaranteed fantastic show and you’ll get your money’s worth every damn time.

After Hellyeah was In Flames. This was only my third time seeing them live. Having only seen them in festival settings before, I must say that I rather enjoyed the more intimate atmosphere of the Rapids Theater. The sound was more accurate in relation to the recorded release, and let’s face it, sometimes the smaller setting makes for a more personal experience altogether. I know I’ll get nailed for this, but I just have to say that “Cloud Connected” was the highlight of their set for me. Yeah, it’s their hit, but there’s a reason for that. It’s a great tune and it always sounds amazing when it’s played at a punishing volume. Another thing I learned from being as close as I was; these guys are complete goofballs on stage. They’re metal all the way, but they also keep it light enough in their attitude to translate a positive vibe 100% percent of the time they are on stage.

Closing the night was a band that finally had their “brother” come home from a horrible situation abroad that has yet to be 100% rectified. Randy Blythe may have a legal nightmare ahead of himself, but Lamb of God came to Niagara Falls, New York, for one reason and one reason alone; to rip through a set of blistering metal delivered with surgical precision. It seemed like there was a more patriotic message from the band than I had seen before, and with good reason. One can only imagine what it feels like to be home after months of being held in a foreign country for a bullsh*t manslaughter charge. Images of our country’s brave service men & women were posted during Randy’s introduction to “Now You’ve Got Something to Die For” and remained a staple theme for the rest of the night. Individual fish-eye cameras set in front of individual band members were turned on with about one-third of the set left and it gave the crowd a very “stadium like” feel while still sitting within the cozy walls of the Rapids Theater.

I hope Randy will receive fair treatment if and when he is called back to the Czech Republic for trial. The sad part is that if I were writing about Justin Bieber being detained overseas due to the actions of a member of security at one of his shows, you’d see every damn mainstream media outlet in a frenzy in hopes of getting our little golden boy home. However, true to form in our metal community, we take care of our own. The suits can make sure Justin & Nick and all the other stars are nice and cuddly & warm. Don’t worry Randy, “we” dirtbags have your back.

In Your Words
Laid to Rest
Redneck
Black Label

We would like to thank Natalie Camillo of Adrenaline PR for the photo pass and Ralfael Castro form the Rapids Theatre for the tickets to review the show.