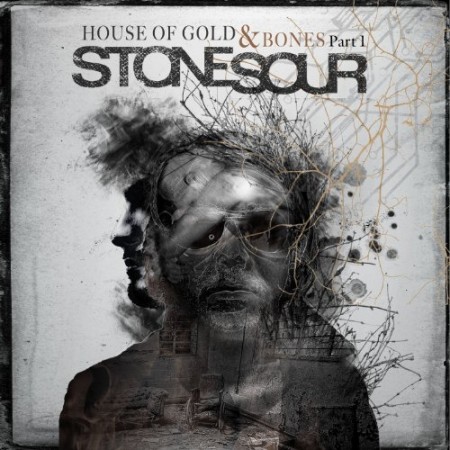 Hard rock heavyweights Stone Sour are back with their latest release, “House of Gold & Bones Part I,” the first half of a double album with Part II to be released sometime next year. The brainchild of singer/songwriter Corey Taylor, the lyrics to “House” were written as a storyline, following the personal journey of the main character as he comes to a crossroads in his life. It is being marketed as a multi-media experience complete with videos, the live show, and even a graphic novel tied into the release.

The record packs a punch right from the beginning with the double single, “Gone Sovereign/Absolute Zero.” Here you will find the aggression that was lacking on Stone Sour’s previous album. With Jim Root and Josh Rand’s guitar heroics and Ray Mayorga’s pounding drums, these songs just explode with energy and abandon. Other hard hitting tracks include “RU 486” and “Last of the Real” which feature Taylor’s screaming growls and ripping basslines from Skid Row’s Rachel Bolan, who played bass for the recording of this new album. There are intimate moments as well, with beautiful acoustic guitars and a haunting vocal on “The Travelers, Pt. I” and the stripped down acoustics of “Taciturn” before it launches into full out power.

“House of Gold & Bones Part I” is without a doubt the best thing Stone Sour has done since their debut album. It is a complete package from the infectious chorus of the first singles to the searing guitars and tender vocals. Bring on Part II!