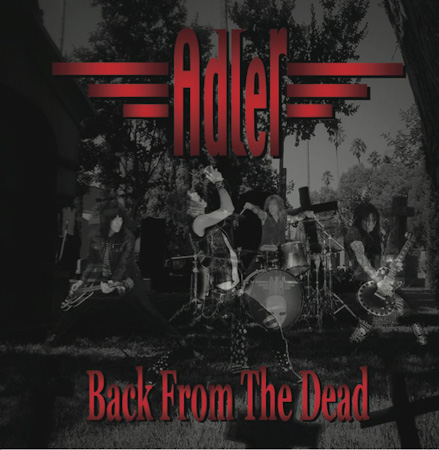 After years of battling substance abuse and a stint on reality television, it’s good to see Steven Adler back in the game doing what he does best, which is of course, playing killer rock and roll. His new project, Adler, recently released their first album, “Back From the Dead, ” and wow, what an album it is.

Produced by Steven and Jeff Pilson, the record sounds fresh and modern but still has a real classic rock feel to it with a bit of blues and punk mixed in. The bulk of the songwriting was done by lead vocalist Jack Bunton and guitarist Lonny Paul and I have to say they knocked it out of the park. There is not one weak or filler track on the entire album with plenty of catchy melodies, crunching riffs, and thoughtful lyrics. There are scorching rockers like “Back From the Dead,” “Own Worst Enemy,” and “Habit.” The first single “Good To Be Bad” has a terrific groove to it and features John 5 on guitar while Slash makes a guest appearance taking over lead guitar on the ballad “Just Don’t Ask.” The piano driven “Waterfall” swells to a huge chorus and “Your Diamonds” has a great laidback feel reminding me of some old school Journey.

Musically, Adler sounds like a well oiled machine driven by Steven behind the kit, Johnny Martin on bass, and Paul tearing it up on guitar. Add in the vocals of Bunton, who is destined to become one of rock’s premier front men, and you have a recipe for success. “Back From the Dead” is a standout rock and roll album, one of the best of 2012.