Killswitch Engage, Shadows Fall & Acaro performed on December 14th for yet another epic night at Buffalo, NY’s Town Ballroom. I learned a good lesson years ago; don’t miss the opener. While sometimes it doesn’t always prove true, Friday night was yet another instance that proved this theory as a valuable rule. While Acaro may not have the global recognition that Killswitch and Shadows Fall have, let it be known; these guys could have headlined the show. The band stepped on stage with obvious purpose and didn’t even let a PA failure stop them. I cannot stress this enough. If you plan on seeing any of the remaining shows on this tour (which ends 12/29 in Clifton Park, NY), make sure you get through the doors with enough time to catch Acaro. The only issue you may have with the performance would be how badly you injure your jaw after it hits the floor. To be totally honest, I almost feel bad for Shadows Fall having to follow these guys. Don’t get me wrong, Shadows Fall is an amazing band that had a super strong set, but I have a responsibility to the reader to “call ’em like I see ’em.” That being said, Shadows Fall IS a great band and is always a pleasure to see live.

Of course, Killswitch Engage closed the night. Celebrating the 10 year anniversary of “Alive or Just Breathing,” the guys go out just like they’ve done every other time I’ve seen them. This band gives you every last bit of what you paid for in your ticket. What’s even better is that original vocalist Jesse Leach is back in the band following his departure shortly after the release of “Alive or Just Breathing” back in 2002. This was my first time seeing Jesse at the helm, and I’ll tell you right now, it’s perfect. Not to discount Howard Jones, but Jesse’s delivery is a more desperate and raw approach to what Killswitch does so well. If you don’t believe me, just wait until you hear “My Curse” as done by Jesse. I loved what I heard all night long, but I about shit in my hat when I heard Jesse do what I had heard only one other way. Adding to the experience is the ever-entertaining Adam Dutkiewicz, who is always a trip to see live. I’d go so far as to say that he’s this generation’s Angus Young. The guy is goofy as hell, but just like the rest of the band, he knows how to entertain a crowd and give you exactly what you paid to see.

My Curse
The End of Heartache 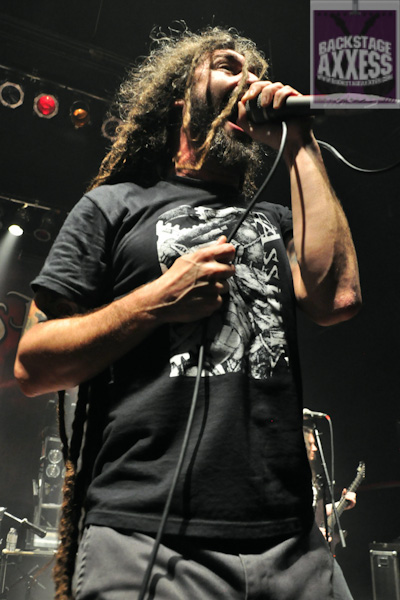 We would like to thank Amy Sciarretto from Roadrunner Records for allowing BackstageAxxess to review the show.