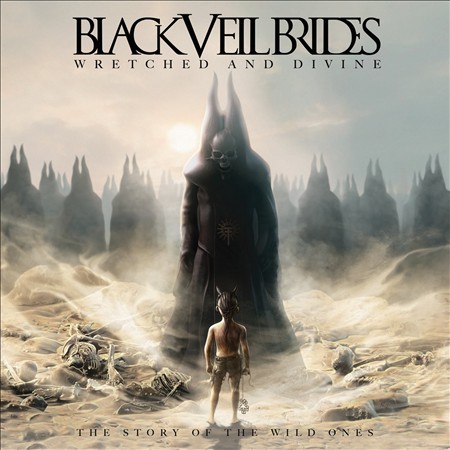 I’m sure you are familiar with the old saying, “you shouldn’t judge a book by its cover.” Well, in this case, I’m talking about a band but the old adage still holds true. Due to their glam rock, goth image, Black Veil Brides has been overlooked by many as nothing more than a flash in the pan. Their loyal and dedicated fan base would disagree and so do I. They have just released their third full length album, “Wretched and Divine” which proves they have a whole lot to offer.

The new record is a concept album loosely based on the theme of being an outcast. It showcases the band as rebels fighting against the powers that be of government and religion. “Wretched and Divine” kicks off with a spoken introduction setting the stage for the songs that follow. Produced by John Feldmann, the record sounds flawless and the songs are tied together with additional spoken tracks or “F.E.A.R. Transmissions” throughout. The vocals of Andy Biersack are top notch whether rocking out on the title track or the softer approach of the piano ballads, “Resurrect the Sun” and “Lost It All.” Guitarists Jake Pitts and Jinxx provide some killer riffs and mean solos as well, especially on “Shadows Die” and ” Devil’s Choir.” I really enjoyed the orchestral layers mixed in with the heavy guitars. Standout tracks include the first single, “In the End,” and “Days are Numbered” which features Bert McCracken of The Used. The anthemic “We Don’t Belong” is signature Black Veil Brides starting off softly before building into a full chorus and will be a fan favorite when BVB heads out on tour.

“Wretched and Divine” is a solid effort from Black Veil Brides and an interesting concept. I don’t think they have reached their peak creatively yet, but they seem to be headed in the right direction.