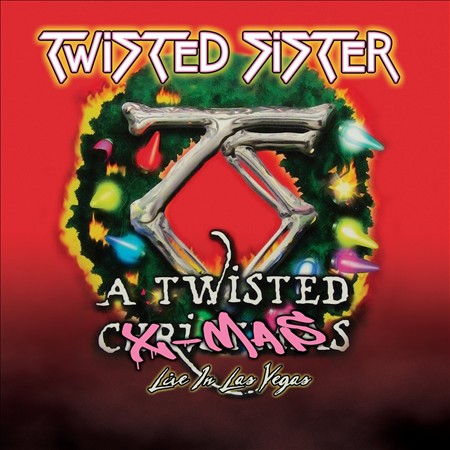 Move over Bing Crosby, you’ve got some serious competition in the Christmas music genre! After the huge success of their heavy metal Christmas album, “A Twisted Xmas,” in 2006, Twisted Sister took their holiday extravaganza on the road. The combination of Christmas classics performed as only Dee and company can and the wild theatrical show that Twisted Sister is known for made for one heck of a Vegas style holiday. All the action has been captured in its entirety on their DVD release, “A Twisted Xmas-Live In Las Vegas.”

The opening intro shows us the stage set up in all its Twisted glory. Think “Miracle on 34th Street” meets “Bad Santa” as classic Christmas decor is mixed with heavy metal debauchery and evil elves. The band members take the stage one by one to an appreciative crowd with Snider Claus himself being pulled in on a sleigh by some scantily clad “reindeer.” With all five original band members, Twisted Sister runs through a tight set featuring amped up rock and roll versions of “Have Yourself a Merry Little Christmas” and “White Christmas,” complete with the requisite snowfall. Their version of “O Come All Ye Faithful” is set to the tune of their biggest hit, “We’re Not Gonna Take It” and they do a nasty version of a Christmas classic where mommy gets caught doing quite a bit more than kissing Santa Claus.

Although the production quality of the footage isn’t the greatest, they did capture the energy of the performance which is most important. There is also an extended skit part where Satan Clause interacts with the individual band members which I thought was rather lengthy and didn’t seem to add much to the show. Twisted more than makes up for it by including some of their biggest hits as they rock the house with “Shoot ‘Em Down” and “You Can’t Stop Rock ‘n’ Roll” before closing out the evening with “I Wanna Rock.” For an encore, they cap off the night with a true heavy metal version of “12 Days of Christmas” with a statue of Ozzy taking the place of the traditional partridge in a pear tree and their heavy metal anthem “We’re Not Gonna Take It.”

Suffice it to say that “A Twisted Xmas-Live In Las Vegas” is not your typical holiday fare but it is a welcome addition for rockers who also enjoy getting into the spirit of the season. Make some room on your shelf for this one and have yourself a “Twisted” little Christmas next year.