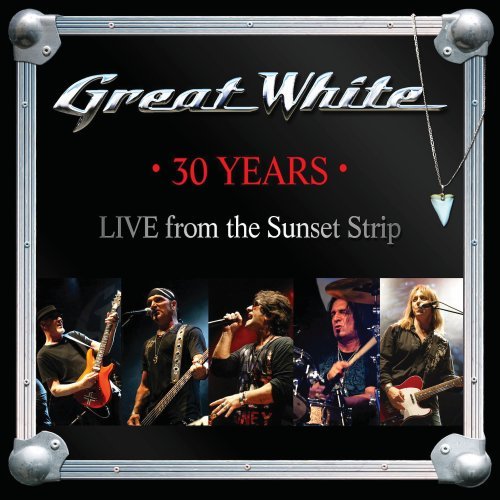 It’s been over thirty years and over six million records sold since Great White first wowed audiences with their gritty, blues based rock and roll. To commemorate the event, they went back to where it all began, the Sunset Strip in L.A., to record their newest album, “30 Years-Live From the Sunset Strip.”

Of course things aren’t exactly the same as they were thirty years ago and the band has split in two different directions. This version of the band is minus original lead singer Jack Russell and has former XYZ frontman, Terry Ilous, at the helm. His vocal tone seems to be a good fit for the band and he does a commendable job. There are a few places though where he struggles with his range, most noticeably on “Save Your Love.” Musically, the band sounds tight and precise as they run through a typical greatest hits list of songs including “Rock Me” and “Face the Day.” The melodies are contagious and the soulful wailings of lead guitarist Mark Kendall are outstanding.

My biggest complaint with this record is that it doesn’t capture the excitement of a live show. There are no crazy solos or stand out moments and with the exception of their extended version of “Once Bitten Twice Shy,” not much audience interplay. If you’re looking for a compilation album, “30 Years-Live From the Sunset Strip” is for you. But, if you really want to hear them “live,” you’ll need to buy a ticket the next time Great White rolls through town.